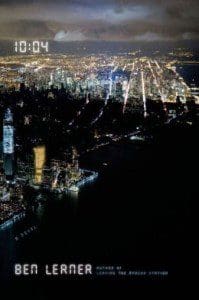 Ben Lerner’s new novel, 10:04 (244 page; Faber and Faber), is at once nonfiction, fiction, and poetry, a rumination on the relation of the three, a work flickering in the liminal spaces among these forms. It asks of its readers that they allow the traditional structure of the novel—including the presence of plot—to momentarily leave center stage and that they make room for a form perhaps more engaging, one that sings “existential crisis!”

Lerner, who is first and foremost a poet, is a writer’s writer. His first novel, Leaving the Atocha Station, came out to great acclaim in 2011. He is constantly experimenting with form and the limits of plausibility—and breaks these literary conventions by fictionalizing nonfiction—frequently employing apostrophe to blend fiction and nonfiction and to reveal the mechanisms at the writer’s disposal. It is as if we have been invited into a space much more intimate than the writer’s studio: In 10:04, we observe his relationships, his travel to shameful fertility appointments in which he must provide a “sample” for testing in order that his best friend Alex be able to move forward with intrauterine insemination. We are with the writer as he washes his hands again and again after worrying that his pants (which have touched the D-line train seats) and the remote used to navigate the clinic’s digital library of “visual stimuli” will contaminate his sample. We pass through his life in New York, his residency in Texas, back in time to meet his mentors, and even leap forward into multiple projected futures. So while the novel is largely defined by its lack of unity of plot, the scenes, however far removed they are from each other, stand alone, and are striking in their humor and wit.

Lerner figures as the protagonist of his own book, in which he writes the novel he is simultaneously narrating. This is slightly reminiscent of the space-time-continuum loop in Back to the Future, from which 10:04 takes its title. In fact, part of the point of the novel is to frequently initiate apostrophe, to shock the reader into realizing he is reading a novel—to know that the time machine is right there in front of him, the author pulling all the strings. This works sometimes to let us know what parts are fiction, yet the question of how true to life the fiction is (something even Lerner himself brings up in the book) nags at the reader.


Passages frequently arise in which the narrator dissects reality, describing the complex processes and cycles that create the mundane objects and routines of everyday life. In this way, the work is largely comprised of experiences of the modern flâneur:

“I want to say I felt stoned … but what I meant was that the approaching storm was estranging the routine of shopping just enough to make me viscerally aware of both the miracle and insanity of the mundane economy … instant coffee. I held the red plastic container … the seeds inside the purple fruits of coffee plants had been harvested on Andean slopes and roasted and ground and soaked and then dehydrated at a factory in Medellin and vacuum sealed and flown to JFK and then driven upstate in bulk to Pearl River for repackaging and then transported back by truck to the store where I now stood reading the label.”

Walter Benjamin made flânerie a major figure of interest in 20th century literature—it is no mistake that much of Lerner’s work takes on this mode, as he cites Benjamin in part as a reference for his epigraph; not to mention the fact that flânerie facilitates rumination over action.

10:04 draws its power from how well it communes with literary tradition, too. “Hysterical realism,” the term coined by James Wood to describe Zadie Smith’s “White Teeth,” is evident in 10:04. The clever juxtaposition of unimportant events with major ones (such as cancer diagnoses), and the author’s obsession with the continual threat of his aorta expanding until it unzips itself craft a fiction focused on mortality. Lerner also employs prolepsis—the imagining of a thing before it has come into existence—to define the present as a locus of futures, which the author is constantly imagining and re-imagining. (At the end of the first section, for example, Lerner explains he will project a future in which all characters have different names, occupations, love interests, health issues, and that everything will “be as it is now,  just a little different.”) Pareidolia—the phenomenon in which the brain arranges random stimuli into a significant image or sound—also drives 10:04.

The book’s hodgepodge of scenes constitutes more a logical structure or argument than it does any actual chronological movement. Though Lerner moves in and out of prose, poetry, multiple levels of time and perspective— gracefully weaving patterns of repetition throughout, echoing and varying earlier passages to create a humorous irony—he does so with such a sure voice he keeps the work rooted and accessible. 10:04 many times speaks to itself, to its own creation (and could in fact be designated metafiction). The reader picks up these nods, becomes accustomed to the metafictional links that tie the story together tighter than any place, character or conflict.

One scene involves a dinner party in which Lerner discusses the novel he is currently narrating. He writes,

After all, what is rising action, a climax, if not a quickening of the heart, something Lerner achieves with formal qualities over content, appropriating the mechanisms of poetry to create yet another accomplished novel.

One thought on “Writing the Novel as He Simultaneously Narrates It: Ben Lerner’s 10:04”