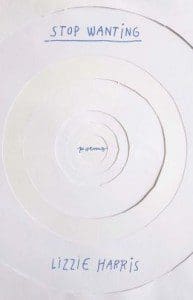 “I want to say what happened / but am suspicious of stories,” begins a poem in Stop Wanting (Cleveland State University Poetry Center, 72 pages), Lizzie Harris’s debut collection, winner of the Cleveland State University Poetry Center’s 2013 First Book Prize. The simple statement of these opening lines illuminates the entire collection, because at the root of these poems, Harris questions how to retell memory without overwhelmingly fictionalizing. This is especially difficult when what happened frightens both writer and reader. Yet Harris investigates her memory with grace and courage in such beautiful poetry that she leaves the reader shivering, line after line. Her poems curl in and out of the experience of living with an abusive father and how that leaves a daughter to fight for her own in the adult world.


In “White Loss of Forgetting,” Harris uses lyric, in which the language can be both poignant and hazy, to truthfully express the difficulty of writing about her subject: “I remember the touching / was softer than I wanted / and after I wanted things quiet / because I don’t trust the skin / that skinned my little body I don’t want to be vague.” The importance of this frankness is stressed  when she repeats “I don’t want to be vague” twice more in the poem:. “he took my body from men / I would one day want to love me / I don’t want to be vague,” and, “he mistook me for a spout / with a head that clicks to expose / infinite pressure I don’t want to be vague.” Each time the phrase is repeated it becomes more and more apparent she is writing in the face of her subject, which requires a great deal of courage and craft.

It would be unjust to only comment on Harris’ personal bravery, because the reason these poems are so startling and successful is in equal part because of how well her poetic daring and lyrical risks harmonize with the content. These poems are made for the ear. In “Timeline,” we swoon with the sounds of the words:. “She would say I was the green sign / pointing to the east, but when I left / her body, she wore me / like a leash.”

Harris elaborates on the relationship between parent and daughter unlike any writer I have read. Though her experience is wholly her own, her poems are universal. They remind us of how we all have a more often than not complicated relationship with the people who brought us into the world, how we grapple with the past and childhoods that define us. In “Want Stopping,” the speaker, “a woman / whole as a watermelon sweet / on a man who wore loafers,” relives a romantic relationship almost in montage: “my brain’s an overloaded / elevator I’ve filled with ten different versions / of you / one when we met four of you sleeping / three of us in the kitchen and / I’m so blanched with blue now.” Stop Wanting constantly asks, what is love? In the inventive prose poem “Love Found You in a Line”— structured through repeating sentences of “Love …”—Harris illustrates the actuality of the intense feeling in complicated and contradicting metaphors: “Love was salt on a mango,” “Love made impossible to make Love,” “Love became invisible,” “Love untied a tourniquet,” and “Love noticed little things.” Each line taps into love’s inexplicable qualities as the poem portrays it through complex poetic layering.

This unforgettable book about a girlhood that cannot be easily forgotten offers us steadfast and heroic poems that enter emotional territory few young poets would brave in their first collection. These poems are traumatic, yet as the poet gains momentum we see a recovery happening, leading to discovery, as Harris becomes stronger than her memories. In “There’s Grass Somewhere, But I Don’t Know How to Find It,” the final poem of the collection, we see she is still searching but is at least heading in the right direction: “You’re sure I love / for the utility, but show me an oven who doesn’t / love her baker…but I could live one day, if or when / I’m ready to.” Though there is something intrinsically vague about childhood memory, Lizzie Harris is not a vague poet. Her truthful poems read as a re-scrambling of experience, disconnected and filtered through years of moving and growing up. Reading Stop Wanting is like meeting an ethereal but frightening ghost. At the end of it, you desperately want more and at the same time you don’t need more of anything at all.