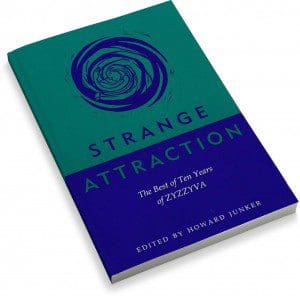 Like the water-bound beasts lawyers are so often compared to, Klacker, Lipmann et al. had swallowed Deb whole. Klacker had 230 lawyers on three floors of the BofA building, and Deb—onetime queen of the Golden Gate Park tennis ladders—wouldn’t stay on the bottom floor long. At home, my desk, her desk, our bookcases, and our tabletops were all buried under Criminal Procedure and Mason v. Richmond and the agonizing briefs that turn socially conscious law students into the money grubbers we are all too familiar with. She had traded in our Saturday matches for days at the library searching for restatements of “cases of, pertaining to, or affected by vicarious liability as it applied to food packaging.” Over rewarmed dinners I had prepared with the Deb I once knew in mind — fettuccine with marinated mushrooms in wine sauce—the Deb I knew now spoke of “interfacing with clientele” and “implementing objective criteria on a go-forward basis,” lingo that pained my young ears to hear. First six pounds lighter, then eight, then twelve, Deb was making it up the organization but disappearing in the process.

We weren’t happy. When together we used f-words often, mine being “fuck” and hers being “firm,” as in “The Firm” and her loyalty to it. It was a price she was willing to pay, but her struggling author/husband—your narrator, Bobby Joe Edmunds—proved incapable of.

I tried! Sort of. I made it through years one through four, each worse than the one prior, keeping my lip stiff and my backbone rigid and trying to think of a future when we could look back and laugh at how hard it had been. I tried to be sympathetic to her motivation—climbing to the top was just her way of survival—but that couldn’t comfort me for long. Nor did it comfort me to find, from the marriage counselor The Firm referred me to, that my plight was common and shared by many. “So what!” I shouted, a man of eloquent and elevated diction reduced to blubbering rage. A line was being drawn in my life, at first blurry but increasingly sharp, a line that separated my love for her from the integrity of life my father had once, among other things, taught me to seek out. He had also taught me, by example, that love is impossible to sustain. I had heard his arguments with my mother and every girlfriend of his I’d known. I had heard his monologue on Blake Island, the week we went camping the summer after the divorce, telling me that all good things come to an end. So when I looked, I saw life as a tornado, risky and dangerous and fundamentally unstable. And I saw the studio apartments and lost jobs and repossessed sports cars of a man I was the spitting image of.

Now I was at risk of losing not only my love for Deb but also the spontaneous wit and open heart that makes a young man a young writer.

I could go on forever here, but my complaints are already exaggerated by anger, while my own role in our undoing is ignored. In truth, it was a difficult time. I was full of indecision when I woke in the morning, not sure why I should climb out from under the covers or what I would do if I did, and for this I blamed Deb: I didn’t consider that my job was godawful boring or that I was frustrated with my unpublishable fiction. I began to think that 28 was a dreadfully young age to have lost the lust for life, and I pegged Deb as the cause of my woes.


Once again, my real life sneaked its way into my work, culminating in a piece handed over to Forest Henning when we asked to see what each other had been writing since I’d seen her last. Hers was a near-perfect story based on her year-long adventure in Africa, while mine was a heavy-handed tale set in the late years  of the last century. Orin Ringling—trapper, trader, and all-around mountain man—waits for his wife in the log cabin he built overlooking the Klamath Lakes. She has taken the mule and sled down the mountain to Grand Falls for supplies—only a half day’s hike each way—but she has not returned. Orin waits and waits, knowing that he should go after her but knowing how much she loves Grand Falls, how she loves the organ player at Whiskey Jack’s, how she likes the flannel sheets and flowered wallpaper in the Gold River Hotel, how she gazes so fondly at the Southern Pacific train that steams to San Francisco. While he waits for her, he fells, chops, and stacks firewood for the oncoming winter, which he knows will be very cold. Gradually, we are led to believe, by the size of his woodpile, now as tall as the cabin next to it, that he has been waiting not a matter of hours but rather months.

“You’ve changed,” Forest said, first thing, when we met at a North Beach cafe to discuss our fiction. She was wearing a gauzy print skirt without the leggings underneath that make the style acceptable in public. When our coffees came, she pulled a fifth of tequila from her knapsack and poured a shot into her mug. It was 12:30 in the afternoon. We were two blocks from where I slaved as a copywriter for KL Computronics. Forest was exactly my age, but at that moment I was aware of how little age has to do with the size of the world one has come to know.

“Why are you married to it?”

“The Firm, for chrissakes!”

Forest mentioned the Tswana tribe of the Mabutsane Delta in Botswana, Africa, where men can take as many wives as they have fingers to wear wedding rings on.

I said that I’d missed her point.

She lit a cigarette and took several deep drags. “I’m just saying that in many cultures, sowing one’s oats is encouraged.”

This was a come-on (even my inexperienced ears could tell that) and I was honest, both to her and to myself, with unexpected wisdom that shot the truth of why I hadn’t betrayed Deb earlier.

“Sowing one’s oats,” I repeated. “I wouldn’t know where to start.”