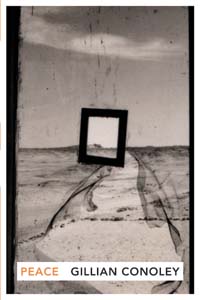 The poems in Gillian Conoley’s Peace (Omnidawn, 112 pages) are characteristically spacious, speculative, full of breath and light. Drawing on a range of registers—the geographic and technologic, emotional and workaday—Conoley explores several categories of peace, broadly construed: the peace of armistice, of reflection, of liberation, of death. In her sparse, inventive lyric mode, Conoley weaves personal and political threads into an incantatory not-quite-narrative whose power lies in the gravid spaces between juxtaposed images and thoughts. It is in the emergent rhythms of “each euphoriant ephemery” that Peace finds its logic—and, perhaps, its peace.

In the book’s first half, three poems share the title “Experiments in Patience,” and while they have little in common thematically, all result demonstrably from the speaker’s effort to cultivate a sense of impassive, contemplative attention. Another poem, “The Patient,” posits a relationship between the homophones; patience, here, becomes the mechanism by which the patient consents to her own humanity, her own “mineral fact.” Throughout these and nearby poems, currents of biological diction propel ruminations on nature and family; “I have long-term storage in double helixes,” one poem reads; the next, “Family more / than genetics / and laundry // sweep the earth.” Between these meditations on patience is a five-page poem called “My Mother Moved My Architect,” a loopy elegy-cum-manifesto in which the poet thanks her mother for a litany of bequests: her “word order,” her “amazon stockings,” the “life-long collage” of her existence. Throughout, the title phrase recurs like a mantra, as if in an effort to reenact her birth (or perhaps conception) or make a kind of hypno-therapeutic journey to the origin of self. The final section follows:

My mother moved my architect
she made it pump and eat

She made this lake
where I come to

over-identify with the dead and call


Dear Echo to my echo,

So that
I have to think what is with

these two heads blurred and blended, thin
curtain not seen back through

What fallen ash
is the power to live

what pituitary
is the grace to keep
doing so

and what good
is temporary measure—

When Conoley says her mother “made [her architect] pump and eat,” I begin to understand that, while all her words resist mere denotation, “architect” here refers to something like the speaker’s body: the sum of her receptive and creative organs. “I am not through / being a poet or a being,” she writes, both claiming the life her mother conceived for her and, in turn, displacing her mother in the cycle of life. Conoley manages to become both her mother and her “architect,” the echo and the primary call into the lake. I think of Inger Christensen’s Alphabet—of its discursive, luminous trails of thought and insistence on the phenomenological power of the speech act. Likewise, in “My Mother Moved My Architect,” Conoley asserts an ontology all her own, importing a range of vocabularies, experiences, and musical—almost circadian—inflections to pit the embodied against the existential.

Like the “Experiments in Patience” sequence, nine of the book’s thirty-two poems are titled “[Peace].” Each contains roughly eight lines and, unlike most of the book, makes minimal use of white space. Several pose questions of war and mortality (“could peace and war be a co-presence / … their separateness a reality one can no longer touch?;” “death is to be entered backwards / the necessary condition”), while others report on static, silent scenes (“a boy eyes a pizza slice / on a white paper plate;” “marijuana scented hush of the glove compartment”). While it is difficult to draw narrative relationships between these pieces, their shared title, “[Peace],” invites me to frame them as either deeply interior (i.e., involved in the cultivation of “inner peace”) or implicitly political (i.e., pacifistic allegories), or as some combination of the two. I find myself reading a poem about a father’s funeral as an account of Kübler-Rossian acceptance, while a poem about near-drowning strikes me as somehow related to waterboarding and, by proxy, Guantanamo.

Perhaps by way of explanation, Conoley prefaces these poems with another, titled “PEACE,” which refers to “the / sudden action of a single word.” In addition to proving that, yes, “all poetry is political”—even (or maybe especially) the nonlinear, hyper-associative sort—Conoley demonstrates how a single titular word can impose a set of normative readings. A poem about a banana tree becomes, by the “sudden action of a single word,” a censure of late capitalism. In another, a closed mouth comes to symbolize the subaltern.

I do not mean to suggest that none of the poems in Peace are overtly political; several are, including “Opened,” which borrows phrases from radio reports on the Fukushima Daiichi nuclear disaster and a speech by President Obama, and “Trying to Write a Poem About Gandhi,” in which Marx, Tolstoy, and the Transcendalists all make cameos. Rather, Conoley draws from all realms of her experience to forge a near holistic vision of her inner world, shaped as it is by distinctly American thought regimes and, more often, her opposition to them. This world is shaped, too, by the Californian landscape: its palm trees and calla lilies, citrus groves and coastlines. The speaker’s parents figure into many of these poems as Conoley contemplates the source and end of life; occasionally, as if with surprise, she mentions her own role as a mother, its joys and burdens.

Peace’s great achievement is its ability to articulate so complete and integral a vision of the world. Conoley’s work might ring of Brenda Hillman or Jorie Graham—and its vacillation between the gestural and explicit might recall the Objectivists—but its timbre is unmistakably her own. In the book’s final poem, “Begins,” she writes, “I love dancing because it makes me feel / strong and beautiful / and made of muscle and air / it is a weedy, unmanicured trail.” I can offer no more apt a description of her verse: muscle and air; unstifled growth along a serpentine, always surprising trail.