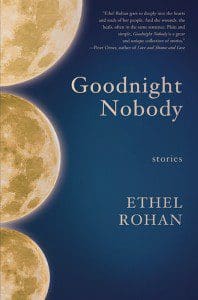 Ethel Rohan’s latest collection, Goodnight Nobody (Queen’s Ferry Press), is a slim volume of thirty (extremely) short stories, most of which clock-in at under five pages. It’s a daring, highly compressed form, and Rohan uses it to turn out characters who are often stuck, ill-adapted, grieving, or fallen out of love.

In “Someplace Better,” one of the few longer pieces in Goodnight Nobody, a guy picks up a girl at a tattoo shop. She’s young and beautiful, and she’s there to get a tattoo of a planet across her forehead. Though the tattoo artist refuses, the manager relents, and it’s only by the saving graces of the interested gentleman that she comes away unmarked: “Come next door and get a drink,” he says, “Think the tattoo over…You’re crazy enough to get a tattoo like that on your face, you’re crazy enough to go anywhere with anyone.” As in so many of the stories here, a bizarre moment, seized upon, becomes a vehicle for investigating character. Working within a form so spare, Rohan sets a demanding pace, one that rarely lets up. The strange planet Diane never manages to get tattooed across her forehead—a last-ditch attempt at agency as well a symbol for “someplace better”—is quickly exchanged for something a bit messier, less tangible. The relationship that forms between Diane and the man of the story becomes a kind of life raft for her, and for the reader it’s a lens through which we’re given a moving image—neither bright nor garish like the drawing the young woman wished to get on her face—of Diane’s pain.


In “Bee Killer,” a woman fumes over her husband’s beekeeping. The bees never sting—not even with her bare hand stuck straight into the hive—but the woman can’t seem to overcome the menace of them, imagined or otherwise. With her hand in the hive, she succumbs to wonderment “at how the bees were all just going about their business, go, go go, innocent of danger and each doing what they did best for the good of the whole,” but afterward her unease swells. Rohan brilliantly folds the woman’s suburban anxieties and the distance she feels from her husband within her attitudes toward the bees. The result is a vivid and tensive, ultra-compact story that ends with the woman making an absurd gesture she can only hope her husband will understand. Leaving to tend to the hive, the husband sees his wife only through “the black net of his mask.”

While “Bee Killer,” is one of the great successes of the collection, several other stories fell short, too neatly composed or satisfied with reductive endings. The story “Darkroom,” for example, begins with the line: “She was thirty-seven, a photographer, and going blind,” and what follows in the next three pages fails to surprise or throw the character into relief. The story ends up seeming more like a thought experiment, and one with obvious entailments. Perhaps it’s to be expected: the short-short story is an unforgiving form, and Rohan is ambitious in this collection. While Rohan may have decided to write very short stories, she’s clearly determined that they not be considered small. I was surprised by “Priority,” a two-page story about a woman who buys a set of knives from a teenage boy who pitches them to her at her home. Rohan deftly evokes the woman’s loneliness and her embarrassment at how she yearns after the boy, but it’s the moment when the woman realizes she can’t remember her ex-husband’s name that is so compelling. “They’re inside me somewhere, bobbing in the dark,” she thinks to herself, trying to concentrate on a name, a face. Of course she quickly remembers them, but it’s the feeling that “Everything comes to nothing” that remains, and alongside it the idea that a brand new set of knives, shiny with possibility, are in the mail.

Perhaps the oddest story in Goodnight Nobody is “Illustrated Girl,” a three-page piece that is a kind of foil to “Someplace Better.” It begins like a fable: in an office which was “a carnival of massive men with thick necks” and “big women with immense breasts” is a tall and skinny woman—a personal assistant who stands out most because of the tattoos all over her body. On a scorching hot day, with the boss out of the office, she takes off her turtle neck and her co-workers begin to gawk and crowd around her, gazing at the tattoos on her neck: a shot glass and a bottle of whiskey. As they ask to see more, she undresses, and her skin reveals an absurd montage, vulgar and eccentric. “They babbled and exclaimed,” writes Rohan, “Fanny wanted to know about the pain of the needles and how I could stand the shame of forever.” At first timidly, and soon after emboldened, the crowd begins to touch and the scene devolves into a kind of orgy, ending with Brian from accounts running his “wet tongue over the red, flaming rocket” on her pelvis.

When the boss returns, the spell is broken, but the story attests to the power of the form to pierce with strangeness. More than any of the other stories in Goodnight Nobody, “Illustrated Girl” is working under the shadow of Donald Bartheleme, master of the short-short story. But Rohan’s work is fun and bizarre, and so a welcome addition to that growing body of literature.