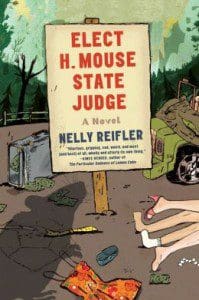 Far from cartoonish, the mice and dolls that people Reifler’s novel transcend their plastic or furry bodies. H. Mouse, politician and adoring father, becomes a conflicted soul. Through him, Reifler embodies one of the story’s central moral questions: What are the limits of empathy? In the beginning, H. Mouse maintains utopian beliefs and policies: “Rocking on his porch, he thought of the word parity, and about how he believed that each of us is basically good, equally so—no matter how some may stray because of their stressful circumstances.” What happens next tests the bedrock of H. Mouse’s worldview.


After his daughters’ sudden disappearance, H. Mouse revisits the characters of his formerly seedy life, freelance criminals Barbie and Ken. He nixes the idea of approaching the police out of self interest: His daughters’ kidnapping occurred on the eve of H. Mouse’s election day to become State Judge. If the matter became public, so would much of H. Mouse’s personal life. This slippery slope leads H. Mouse to the edge of his morality. He admits to prioritizing his career over his daughters’ safety, and accepts he is a lesser mouse than he previously believed.

Laced throughout this morality tale, uproarious kickers underline the absurdity of learning about our humanity through critters and Skipper. Barbie and Ken, in between their espionage duties, can rarely stop themselves from copulating. They remove each other’s heads, rub their exposed neck balls, and stick their stiff arms into the other’s empty head socket. For Barbie, her risky lifestyle heightens the euphoria: “…being in danger made her appreciate the moment, made her appreciate life’s simple pleasures like sunny days, pretty clothes, good food, and having her orifices penetrated.” Startling zingers like this abound.

After Margo and Susie’s kidnapping, a family of dolls indoctrinates the two sisters into their cult. If they want to eat again, the mice must show their faith. This tests Margo Mouse’s ability to understand other beings, even her sister, who laps up this newfound religion. To Margo, the doll family was “empty and needed to be filled” by meaningless dogma. Meanwhile, ditsy Barbie searches for Margo and Susie, and struggles to understand the cult as well. An inside expert says the cult members might commit suicide. This baffles Barbie. “The lowlife scum she was used to confronting might care about nothing but themselves; however, they did care about themselves.” Each creature and doll can only go so far to empathize with other species, or even themselves, as in the case of H. Mouse.

H. Mouse undergoes a metamorphosis while agonizing over his daughters. His opposing personas—judge and patriarch—rupture his consciousness. The two priorities conspire against his better instincts, “having him do and say things he never would have dreamed he was capable of.” As H. Mouse is sworn in to be state judge, he has already declared himself guilty of failure as a law-abiding citizen and father. Meanwhile, Barbie has learned to cherish her own child, Skipper, and has found new emotional depths: “Her eyes were open. Her eyes were always wide open.” In this sobering tale of mice and dolls, Reifler never lets up on the humor.