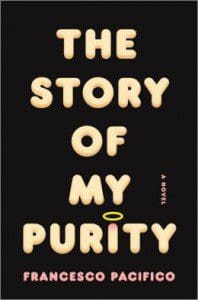 Unreliable narrators have populated literary works for hundreds of years. Piero Rosini, the narrator of Francesco Pacifico’s novel The Story of My Purity (Farrar, Straus and Giroux; 292 pages; translated from the Italian by Stephen Twilley) is not unreliable in a naïve or precocious way like Huck Finn, but utterly loathsome in the vein of Nabakov’s Humbert Humbert. Rosini is a devout Catholic working as an editor in a right-wing publishing house in Rome. His current project is a book that would expose Pope John Paul II as having been born Jewish and planted in the Catholic Church by Frankists. An anti-Semitic xenophobe, Rosini has also ended sexual relations with his wife and given up music and novels to dedicate himself completely to his faith. Yet at the age of twenty-eight, faith hasn’t exactly led him to paradise. “I’ve read all of Tolstoy, visited New York and Tokyo, slept in castles on the Loire, and now I live across from an IKEA,” Rosini informs us early in the book.

Rosini is not completely devoid of desire. He harbors secret feelings for his sister-in-law Ada (or more specifically, for one part of Ada’s anatomy). And by chance, he befriends an aspiring novelist named Corrado, who leads Rosini from a sheltered life among the devout into Corrado’s group of boisterous co-workers, including the sultry intern Lavinia. In a single encounter, Lavinia awakens Rosini’s sexual desires. When word arrives that she has disappeared to Paris, Rosini makes up reasons to move to that city as well. He tells us he needs a fresh start in life, that it would be best for him to avoid the future media firestorm of his new book, The Jewish Pope, even referring to Paris as “the Virgin Mary of cities.” Nobody is fooled. He moves to Paris to find Lavinia. If Rosini thinks Paris can help dispel the mounting temptation found in Rome, he apparently hasn’t done his research on the city. Soon he is in love with a Jewish woman and finds a best friend in her uncle, both of whose values challenge the pillars of Rosini’s faith. His beliefs begin to fracture, and his mind follows suit.


Pacifico elicits a fair amount of laughs from his caricature of a narrator and his ridiculous, offensive theories, but Rosini isn’t totally laughable. He strikes us as a man who is not happy in his life, who is crippled by his blind faith to the Church and whose  dedication to purity is clearly riddled by sexual frustration. As his bottled-up sexual desires become harder to control, we watch as his befuddled mind turns possibly liberating sexual encounters in Paris into disasters.

The Story of My Purity, a raucous examination of the conspiracy theorists and strict theologians that exist among Italy’s ultraconservative Catholics to this day, is not the story of redemption for a repugnant narrator whose every word is dispelled by his own actions—nor does it ever try to be. Rather, it’s the story of a man led astray by his own beliefs.