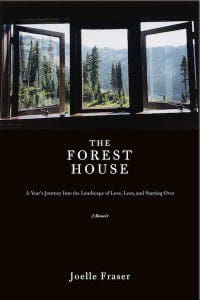 Nature plays an integral part in Joelle Fraser’s new book, The Forest House: A Year’s Journey into the Landscape of Love, Loss and Starting Over (Counterpoint Press, 224 pages), which chronicles her life right after her marriage ends.

Wanting to disrupt the life of her young son, Dylan, as little as possible, Fraser resolves to stay near the small mountain town where Dylan’s father lives. The only place she can find that’s close enough to town, but far away from the gossip (it was Fraser’s decision to leave her husband) and sympathy there, is a one-bedroom home tucked into the forests of the Sierra Nevada. With a dirt road leading up to the forest house and miles separating her from the nearest neighbors, Fraser learns quickly how to become self-sufficient. Her first months in the house take place in the dead of winter, which brings terrible snowstorms, power outages and an increased sense of isolation as she mourns her losses.


Alone, except for when her son visits, Fraser struggles to come to terms with losing half of Dylan’s life because of joint custody and with living hidden away in the wilderness. As Fraser tries to navigate these internal and external landscapes, she probes into her family history, finding similarities to her situation in the story of her great-grandmother, who had to leave behind her six children in Sweden when she immigrated to America with her husband, whom she would wind up divorcing. Time passes, and Fraser settles into her new home, the wild that surrounds it, and her new identity.

The strength of The Forest House comes from Fraser’s ability to seamlessly weave the nature surrounding her into her story. Each chapter begins with an epigraph, dealing with weather, trees, animals, or a type of plant, preparing the reader for the type of encounter that she will be exploring in that section. Each wilderness backdrop, from the harsh snows and winds of winter to the charred remains of an old forest fire, is expertly laid out, drawing the reader into the physical space of the Sierras.

Fraser (whose first essay in print, “Karyn’s Murder,” appeared in ZYZZYVA’s Fall 1998 issue) makes a compelling case for those in need of a new beginning to retreat into the wild. In taking refuge in nature—availing herself of the privacy and the quiet the forest house provided her—Fraser deals with her losses and rebuilds her life.

One thought on “Finding Refuge From the End of a Marriage: Joelle Fraser’s ‘The Forest House’”