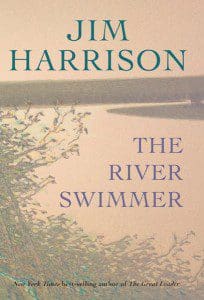 Two men looking at life from opposite directions are at the center of The River Swimmer, the new collection of two novellas by Jim Harrison (Grove Press, 198 pages). Each novella contains a rich, original story but read together they offer different perspectives on what is essentially the same issue.

“The Land of Unlikeness” examines the nostalgia of a man who was once defined by art but has since given up his passion. Clive, a former painter turned art history professor, returns to his hometown of Ypsilanti, Michigan, following an embarrassing incident at a lecture. Placed in charge of caring for his mother while his sister vacations in Europe, Clive initially misses the money-driven lifestyle of Manhattan. He dismisses his lack of painting as trivial when he arrives in the countryside, but the sight of his childhood crush, Laurette, exposes Clive’s past pains and reignites his desire for art. At one point, discussing Dostoevsky, Clive says, “Mother had written her term paper on The Brothers Karamazov, a book that some never recover from any more than certain painters don’t get over Caravaggio.” He may as well be speaking of how he never recovered from seeing Laurette sprawled on the passenger seat of his ’47 Plymouth. Clive attempts to reclaim the past by painting the portrait of his crush in the one pose he never wants to forget. In doing so, he reflects upon his career, his lovers, and how everything in his world revolves around money.


“The River Swimmer,” narrated with mythical flair, tells the story of Thad, a seventeen-year-old boy who was born on a farm that sits on an island in the middle of a river. Thad is an elite swimmer being pulled in all directions—the father of a Chicago rich girl wants him to marry his daughter, college coaches want him to swim for their teams, and a family friend wants him to be a father to her children. Thad only wants to swim and to examine the life of “river babies,” creatures he discovers underwater that he believes are the spirits of dead babies. Following a broken jaw suffered at the hands of the town bully, Thad recuperates in Chicago with Emily and her rich father, John Scott, until Thad’s father is brutally attacked by the same man. John Scott convinces Thad to travel abroad with Emily in hopes that Thad will fall for her. Instead, Thad uses the trip to Europe as an escape to swim in new locales, and goes with a plan in place to free himself from being trapped by John Scott’s money: he decides he would like to become a painter.

When examined together, the novellas offer Harrison’s harsh criticism of the pressure money puts on the arts. Though the two men exist at different points in life, each wants to paint and each witnesses how money can be used to control people. In “The River Swimmer,” Thad wonders, “Why should everyone want to be a big shot? Why not just plant flowers in cities for likely low wages and make everyone with eyes happy?” Similarly, Clive says “he had known many writers and painters who apparently disliked writing and painting but just wanted to be writers and painters.” These remarks reveal the inherent problem of the art world as seen through the eyes of a veteran like Harrison. Money plays too big of a role, and no one is willing to make something beautiful just for the sake of making something beautiful.

Harrison does not restrict his characters, though, to one-dimensional vehicles for his criticism. Often, he will allow the internal dialogue of the stories to slip into philosophical pondering, on not just art and money, but also on family and time. “What was the shape of his own personal world? Perhaps time was clay that could be shaped and reshaped,” Clive wonders early in the book. (Interestingly, though the novellas show men at different points in their lives wondering when exactly we are supposed to be happy, each finds happiness in a state of mind, not in a particular time.)