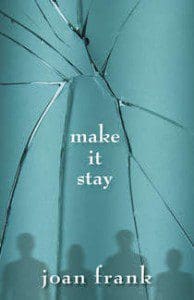 As love connects us to our closest friends, these friends can’t help but define us as we grow older. Over time, even the lovers and other friends of these people we hold close become intertwined in our lives. Joan Frank’s fifth book of fiction, her new novel, Make It Stay (The Permanent Press, 160 pages), examines the close friendship between two men, and how their love grows in the face of old age, spouses, children, and tragedy.

Neil, a Scottish immigrant, finds his way to the quiet Northern California town of Mira Flores. He meets Mike, the boisterous owner of a downtown exotic fish store. After two years of friendship, Neil accompanies Mike on a diving trip in Tahiti and nearly drowns. Mike saves his life, an act that seals the bond of friendship between them. As Mike ages, he meets and marries a wayward drunk named Tilda and the two produce a child, Addie. Addie grows up, becomes successful, and moves away, with seemingly no help from her dysfunctional parents. Throughout the family’s collective life, Neil is always standing by Mike’s side, helping out when trouble arises, just as a good friend is expected to do. Tragedy ultimately strikes the family in the form of a mysterious crime, one that the reader can only guess as to the perpetrator.


Though the story of Neil and Mike’s friendship grows to include Mike’s wife, Frank chooses to tell the story through Rae, Neil’s eventual spouse. Rae does not enter the story until after the tragedy. But by selecting Rae as her narrator, and having the entire history of the relationship recounted to Rae by Neil (while preparing for a dinner party), we see their history with fresh eyes. Rae’s observations bring humor to the story (when Neil forgets their anniversary, Rae casually dismisses the transgression by stating, “Well, men.”), but also an objective distance. Through her, we get a different perspective of Neil, Mike and Tilda, resulting on a more complete picture of all of them.

As Rae eventually becomes part of the group, and becomes entangled in the problems of Neil and his friends, she further comments on the events surrounding her. Eventually, equipped with her own opinions of the tragic events that befell Mike and Tilda, Rae announces her own theory of what happened, a theory the reader has constructed with her. Yet as soon as the words come out of her mouth, she understands she’s made a mistake. “Not the best tactic. But I’ve seized on it in a burst of defensive righteousness.”

Frank’s novel shows the strain that tragedy, aging, and distance can have on two friends who truly care for each other, and the toll it can take on the spouses who love them. We can only hope that the strongest of our own friendships outlast the individual events that may plague our lives. Examining her husband’s relationship with Mike late in the story, Rae wonders, “Years of childlike renditions of him. What can it add up to? Probably this is what horrifies Neil. It adds up to nothing.” But it doesn’t add up to nothing. It adds up to love.