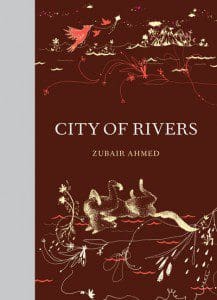 Zubair Ahmed’s first poetry collection City of Rivers (McSweeney’s, 96 pages) captures the reader’s heart from its first line to its last. These poems are reminders of poetry’s power to leave us breathless after immersing us in truths, both wonderful and painful. Ahmed, who was born and raised in Bangladesh and moved to the United States in 2005, explores memory and identity with a sincere voice steeped in genuine experience. These are dense poems, carrying the story of an individual, of a family, and of Bangladesh itself.

City of Rivers opens with “Measuring the Strength of a Sparrow’s Thigh” and the words “I’ve been walking for many nights now, / Heading south in Bangladesh / Where the sea churns / Into a hundred deltas / And the landscape looks like a rotting nail.” The poem is a provocative introduction to the collection’s recurring themes: reflection on a past life, the search for home, and the darkness that lingers in memory. The speaker of City of Rivers walks and is always walking, and we find all the poems that follow are steps on a winding journey from here to there, present to past, and back again.


Memories come in fragments, and it is around such fragments that Ahmed shapes a number of his poems. At the sight of the trees, the poet recollects his “grandmother’s shawls,” and in the poem “Self-Portrait with Glass Bottle and Kite,” we read of the fragile objects that link a new life to the old one. The poem moves from lakes and mountains in America to the monsoon rains in Bangladesh. The poet’s identity is in constant tension between two lives, because objects, such as a glass bottle, can always take him back. “I’ve seen bones rain down / From this Texas sky. / I remember the bloodstained windows / That gave birth to my country,” he says, re-entering his old world. Ahmed’s poems are a masterful weaving of two half-lives making up a single identity.

But they are also more than that. The speaker and his family are also a lens through which the rough history of Bangladesh is explored. In “At a Photo Exhibition for the 1971 Liberation War,” the poet observes a picture of a boy, limbless and faceless, being eaten by a dog. And at the sight of it, he confesses, “When I sleep I join the dead / In vast courtyards.” In yet another poem, “It’s Raining Again,” Ahmed intertwines harsh realities with common everyday events, in which people “whisper about disease, / About the acceptable ways / Of burying their children.” The picture painted is often dark but also wonderful, as these poems remind us that not all beauty is grand and that there are treasures in ugliness.

City of Rivers is a pilgrim’s fragmented history, a reminder of the importance of remembering the events that shaped us. It then asks how we might move forward in light of this. As one poem reads, “My right leg walks off / Alone / And finds itself / Among the vines that ruin houses… My right leg looks toward the hilltop. / My left leg will never make it there.” Zubair Ahmed’s City of Rivers is painfully profound, and will certainly leave a mark on its readers.