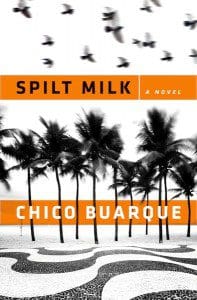 Musician and author Chico Buarque came of age with the installment of a brutal military dictatorship in Brazil, one that was to last for more than twenty years until it toppled in 1985. A pioneer and experimenter within bossa nova, Buarque wrote subtle lyrics protesting the regime’s violent suppression of dissidents, songs that made it into his country’s popular consciousness. To this day Buarque is regarded in Brazil as a vital cultural stalwart, an artist who, since the early ‘60s, continues to examine his country and instill large social change. His most recent novel, Spilt Milk (Grove/Atlantic, 177 pages, translated by Alison Entrekin), which encompasses two centuries of Brazilian history through one man’s experiences, is no different.

Strangely, in the protagonist of Eulálio Assumpção, the 100-year-old descendant of Portuguese invaders and the beneficiary of colonialism’s vast harvest, Buarque fashions a grudgingly likeable narrator. Eulálio lies on his deathbed amid the beeping machines and silent nurses of a Rio de Janeiro hospital. Though it’s unlikely he was this crotchety in the bloom of youth, Eulálio at this age seems to magnify certain long-held traits. He is racist, sex-obsessed, and heartsick over his long-gone wife. He is the product of a privileged childhood and of a precarious career as a weapons dealer. He is also on a morphine drip.


Buarque’s resultant story is intricate, and cloudily encased by Eulálio’s fragile state. We slip with him from the present (a landscape of incompetent nurses and hospital food) into a vague and even more slippery past, where he remembers, again and again, the moment he met Matilde, the cinnamon-skinned woman he was to marry. For all his mental wanderings, Eulálio retains vibrant moments of lucidity (and resignation):

“For the past, however, I have an increasingly spacious drawing room where there is more than enough space for my parents, grandparents, distant cousins and friends from university that I’d already forgotten, with each of their drawing rooms full of relatives and in-laws and gatecrashers with their loves, as well as all of their memories, all the way back to Napoleon’s time. For instance, right now I’m looking at you, so loving with me every night, and I’m embarrassed to ask you your name again. On the other hand, I can recall every hair of my grandfather’s beard even though I only knew him from an oil painting.”

And then Eulálio snaps back into a less meditative present to insult the subpar hospital fare. “I did tip my plate onto the floor, I won’t deny it, and I’ll do it again every time I find a sinew in my steak…Wait till my mother finds out,” he rails.

Buarque takes his time with Spilt Milk, a book whose real story sits beautifully obscured by Eulálio’s skipping incoherence. The emerging picture, though, is the Assumpção family’s disintegration, or maybe absorption, into the fabric of modern Brazil. Once pale-skinned plantation owners, by Eulálio’s hundredth year they have become ambiguously multiracial, of Communist sympathies or politically apathetic, completely not notable, and sexually flagrant in their samba dancing.

Buarque’s deftly makes apparent, though, that the family’s present unruliness was apparent all along. Eulálio fixates on Maltide, whose parenting was dubious and who seems to be on repeat in his thoughts where she wildly dances the maxixe in a bright orange dress. He recalls his sexual heyday with a cutting, precise yearning. He even snorts cocaine with his visiting great-great-grandson.

Buarque’s portrait of Eulálio provides a lens through which to see Brazil’s turbulent and complicated history. “Anything I remember now is going to hurt, memory is a vast wound,” says Eulálio. With this in mind, Buarque judiciously applies the salt: Spilt Milk is a necessary, often painful examination of not just a man’s wounds but also of a country’s complicated past.

2 thoughts on “Brazil’s Complex Past, Recounted from a Deathbed: Chico Buarque’s ‘Spilt Milk’”