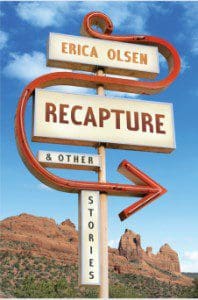 Erica Olsen’s story collection, Recapture (Torrey House Press, 161 pages), presents the American West as a cabinet of curiosities, containing the artifacts, animals, and lonely people abandoned along man’s quest for the coast. These sixteen diverse tales (one of which, “Reverse Archaeology,” originally appeared in ZYZZYVA) emerge from the geography of America’s remaining vacancies, where the civilized go to escape the mess of civilization. Olsen, acting as chief archeologist, presides over these sparsely populated landscapes. With each story, we gain access to unknown physical and emotional territory.


Winding through high altitudes and into gaping canyons, past awe-inspiring, prehistoric  lake beds and across endlessly flat deserts, Olsen’s stories take us to the remotest of destinations—the kinds of places made for getting lost. Such natural architecture welcomes the robust adventurer, but Olsen sends into this wilderness a different type of traveler. These haunted tourists, never at ease in the isolation of the desert, seek a kind of spiritual rejuvenation that often proves too potent for them; they remain stubbornly civilized.

Against this unforgiving scenery, Olsen excavates her characters with scientific precision, carefully uncovering their layers, treating imperfections with a delicate hand. She portrays humanity at odds with nature and humans at odds with themselves, offering a vision, as depressing as it is comical, of man’s attempt to preserve the wilderness. Park rangers, curators, conservators, and conscientious campers, along with all matter of made up goons and officials, take the job of regulating and mechanizing nature very seriously. These misguided preservationists transport entire landmarks states away from their original spots (as in the collection’s title story); they regulate breezes and sunsets at national parks—a perk that provides the tourists in “Utah WildMall Rangers” with better photo ops. And in “Grand Canyon II,” they even replace the run-down original of the national park with a life-size replica, a “geological clone” complete with animal tracks and centuries of erosion.

Olsen invites readers into the middle of America, the midpoint between the ancient and the modern, where antiquity meets smart phones and sunsets on timers, where myth meets science. Recapture is a living, breathing museum of natural wonders. With writing as spare as the landscape she evokes, Olsen wades through the detritus of the human experience and finds clarity there, and some magic, too.

One thought on “Humanity Bewildered in the Remotest of Places: Erica Olsen’s ‘Recapture’”