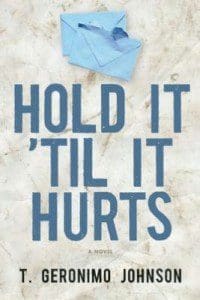 Upon bringing home his newly adopted son, who is black, to his other son, Achilles (also adopted, also black), the white father in T. Geronimo Johnson’s Hold It ‘Til It Hurts (Coffee House Press, 342 pages) announces, “Don’t need blood to be brothers.” Johnson’s violent first novel, though, effectively proves the opposite, but in a different sense: tearing through Afghanistan and Hurricane Katrina, the morgues of Atlanta and the stilted subdivisions of Maryland, Achilles Conroy finds familial love in the most harrowing situations.

If Achilles’s younger brother, Troy, is “fearless and light, like a rock that floats,” Achilles is an anchor desperately trying to hold him in place. He follows Troy through high school extracurriculars and then a military tour in Afghanistan. When their father dies and Troy disappears, presumably to look for his birth parents, Achilles trails after him again, anchoring in New Orleans.

Johnson, a native of New Orleans who now teaches creative writing at the University of California at Berkeley, writes carefully and wrenchingly of wasted landscapes. We have Afghanistan, with “the biggest sky he had ever seen, a dark sheet with that perfect sphere of light in the center like a watchful eye…it was all so stunning that as he fell asleep in that cave beside his brother…it was hard to believe someone out there was trying to kill them.” Then there’s New Orleans, harboring a terrible pre-Katrina humidity in the air.


We might expect his characters to be as ravaged, and Johnson sets them up for disaster, which he suspends, achingly, over them. With Achilles, he has created a narrator so stoic he is nearly unlikeable. The war is never over for him; violence and virulence come home with Achilles and meet him in New Orleans and Atlanta. Trauma is constant, and an overwhelming theme in Hold It ‘Til It Hurts is what it means to be under ceaseless threat.

Much of this threat, though, comes from within Achilles, who grapples with strategies on how to live to live as not just a black man, but one with a light-skinned brother, with white parents, with a weapon, in the South, and dating a fair-complexioned woman, Ines Delesseppes. Johnson tackles self and societal shame around race as yet another hazard to hole up against. That vigilance is evident even in Achilles’s walk, which Ines precisely lampoons:

“You hulk a little, hunched like you’re under pressure, like there’s something you’ve got to hold so tightly, hold it until it hurts you, like you’ve been kicked in the stomach, like you’re carrying a secret and you think if you squeeze it tight enough, it will become a diamond.”

So constant are these threats that when heartbreak comes, it’s not with the whistle of a rocket but in the form of something good. Some of Johnson’s strongest, most wrenching writing in his novel are in the form of love letters to New Orleans (his hometown) and to Ines:

“They went first to Café du Monde for hot chocolate made with real milk, and beignets – the blessed French pastry flash-fried and dusted with confectioner’s sugar. Ines called it sacrilege when Achilles ordered his without sugar. She ate hers proper, so that the first bite released the dulcet steam trapped in the center, coating the tip of her nose and making a mustache. In a deep voice she said, ‘Kiss me dammit.’ And he did, quickly, suddenly shy, stealing a kiss that tasted of sugar and chocolate and lipstick…

“Ines looked at Achilles’s ashy hands, pulled a bottle out of her purse, slathered his hands with lotion, and massaged it in until his hands were smooth and gleaming, even the knuckles shimmering like wet coffee beans. She did this without skipping a beat in the conversation, and when she finished, his hands were throbbing.”

Because Achilles has been hardened by bad news and violence, his yearning for Ines and his joy at realizing love are hard for him to take; we feel how foreign this happy territory is to him. Even as Johnson takes us on this odyssey through wartime America and an eventually devastated New Orleans, his ability to precisely describe the depths of a young man inoculated against both love and violence shocks us, again and again.

One thought on “Brother’s Keeper: T. Geronimo Johnson’s ‘Hold It ‘Til It Hurts’”