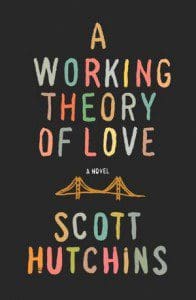 Scott Hutchins’s first novel, A Working Theory of Love (The Penguin Press, 328 pages), is a refreshing exploration of how the many relationships every person has can shape who we are. It is a reflection on failure, fear, grief, hope, and, of course, love. Lovers, friends, family, coworkers, and even the city in which one lives: Hutchins demonstrates what these connections can mean in our search for fulfillment.

Neill Bassett Jr., a San Franciscan divorcee, is trapped in “the doldrums of physical isolation,” stuck in a dull cycle of unsatisfying bachelor routines and a Silicon Valley job. He works at a three-person company led by a renowned scientist whose current task is to create the first truly sentient computer. Despite knowing next to nothing about programming, Neill is integral to the project’s success because his dead father’s expansive journals will form the cornerstone of the program’s mind.


As Neill works to inject life into Dr. Bassett (the program is named after its human predecessor), he finds his own life stirred up by various relationships, new and old. And though Neill states early on that “[n]ot everyone’s life will be a great love story,” Hutchins spins a narrative that considers the many shapes love can assume and forces us—and Neill—to reconsider the possibility.

Romantic adventures with twenty-year-old Rachel, a one-night-stand-turned-girlfriend; run-ins with ex-wife Erin; and conversations with a deceased-yet-digitally-reincarnated father all bring Neill face to face with failures from the past and fears of the future. Hutchins seamlessly stitches the many stories of Neill’s life into a captivating narrative that has readers laughing, grieving, and hoping. Like Neill’s beloved San Francisco, his life is marked by splendid and surprising ups and downs, which he navigates in a search of truths.

Failure is a key idea in Hutchins’s novel, as unmet expectations and heartbreak are acknowledged as inevitabilities. However, as Neill is pulled out of his bachelor shell, he comes to learn that “Man’s perfections are only glimpsed through Man’s imperfections.” That line becomes a mantra as Neill’s company’s tries to humanize the digital Dr. Bassett, whom they even imbue with vices to make him seem more human.

Hutchins appropriately spreads around experiences of failure among his varied characters, making them relatable and reminding us that no matter the time or place “persons need fulfillment.” The failures of the past should not paralyze people, keeping them from connecting to each other. After all, as the digital Dr. Bassett says to the flesh-and-bone Neill, “People change, son. That’s an important lesson.”

A Working Theory of Love couples this idea of change with an optimism capable of standing its ground against life’s miseries and mistakes. After all, in a world mired with the complexities of what is ideal, what is imperfect, what is perceived, and what actually is, true life and true love, Hutchins shows, are “negotiated in the space in between.”