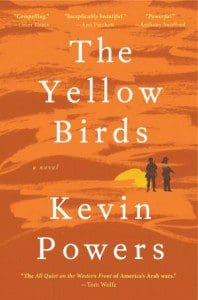 Those of us who have not experienced the pains of war can never claim to understand them, but Kevin Powers’s first novel, The Yellow Birds (Little, Brown; 240 pages), gives its readers a poignant glimpse. Powers, a poet and a veteran, takes us in medias res to Al Tafar, Iraq, and into the life of then-twenty-one-year-old Private John Bartle. Matching the novel’s form with its chaotic content, Powers takes us in and out of scenes from Bartle’s life between 2004 and 2009, spanning the before, during, and after of this one soldier’s war experience.

Powers’s weaving of these moments masterfully expresses the way the war spirals out from memory and experience to encompass an entire life. “It might seem like a short time,” Bartle reflects, “but my whole life since has merely been a digression from those days, which now hang over me like a quarrel that will never be resolved.” From the now-apparent emptiness Bartle comes to see as his pre-war past, to his struggle to return to a life back home in Richmond, Virginia, readers come to feel the weight of the war as it seeps from Bartle and spreads into every part of his existence, like blood into white linen.


The Yellow Birds, through Powers’s engaging prose, declares that for some the war is a mystery that turns every other thing into a question. Powers shows that meaninglessness, more than anything, is what the war breeds, and how all the complexities of war and of life are boiled down to the simple idea that things are just what they are, with no other significance needed. “(T)hings happened the way they happened without regard to our desire for them to have happened another way,” says Bartle, who struggles in an endless cycle of confusion, catalyzed by the loss of a friend. “Despite an age-old instinct to provide an explanation more complex than that, something with a level of profundity and depth which would seem commensurate with the confusion I felt, it really was that simple.”

Loaded with physical and psychological tensions, The Yellow Birds is driven most powerfully by Powers’s poetic descriptions as he lays out the distinct emotional and geographical landscapes of the Iraq war. From the lights of Al Tafar to the curling of Bartle’s fingers around his rifle (which is at first real, and later, hauntingly imagined), The Yellow Birds offers a series of crisply described images that give life to the novel’s opening words—“the war tried to kill us”—and sustain them until the story’s end.