“Zyzzyva is a snouted beetle, as any dictionary kid knows. It’s a word that nearly can’t be played in Scrabble, on account of all the Z’s. But those are novelty uses. The real meaning is this superb literary journal, which has real meaning. If you want to learn the things that literature can do with language, read it.” —Ben Greenman

The latest issue of ZYZZYVA adds another dimension to the journal’s mission of spotlighting the West Coast’s best writers and artists. This Fall we present “Expats,” a selection of new work by John Freeman, Dagoberto Gilb, Edie Meidav, and Luis Alberto Urrea: authors with deep roots in the region, who have now made their homes elsewhere.

Get your four-issue subscription to ZYZZYVA now and start with the Fall issue. (Copies are limited.) 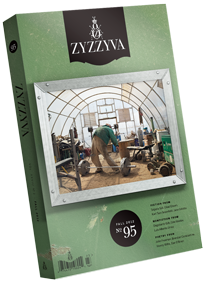 “In the Fall Issue” by was published in ZYZZYVA No. 95. Purchase the back issue in our shop.