In her recent memoir, The Shyster’s Daughter (Etruscan Press; 250 pages), which was excerpted in ZYZZYVA 91, Paula Priamos investigates the death of her lawyer father and paints an unapologetic portrait of her family, with characters both perverse and loving.

Priamos peers into the motivations of her family members with a rare and enticing frankness that distinguishes her work from that of other memoirists. Beyond the title, Priamos hints at the type of story she’s about to tell in the first page with a description of her father, who’s phoning her. She can easily imagine him being “somewhere far sleazier” than from where he’s actually calling, a strip club. That call would turn out to be the last one he’d ever make to her.

ZYZZYVA talked with Priamos over e-mail about her memoir and her family.

ZYZZYVA: The hard-boiled narrative of The Shyster’s Daughter does not seek to definitively answer any questions about your father’s death, but your character does not accept the inevitability of this open-endedness until the end of the book. Where do you stand now, in terms of that acceptance? Did writing this memoir provide any catharsis?

Paula Priamos: Completing the memoir enabled me to better understand my father’s life and the mysterious way he died. If you read the book closely, my opinion of what happened is there in the narrative. I just didn’t want to make it so pronounced that it takes away from a reader’s interpretation of the events, because nothing is definitive except that he died hours after he called me one night, which is where I decided to start the book with the prologue.


Z: Did you initially intend to write The Shyster’s Daughter as a detective story, or did the subject matter simply lend itself to that type of noir narrative?

PP: A reviewer has likened my memoir to noir writer James Ellroy in that it takes the reader to the same dark L.A. mean streets but winds up someplace very different, so I can see why The Shyster’s Daughter is being referred to as detective memoir. It’s very much a noir narrative in the sense that it’s a dark story with a lot of unanswered questions. My father died mysteriously.  He called me the night before he died to tell me he’d just cheated death. A gunman approached his car and threatened to blow his brains out. But my father wouldn’t stand for cowardice and without thinking of the possible consequences, he flipped the guy off and drove away. The next morning he was found dead. I’ve been haunted by that call for years. What if I’d convinced him to go to the cops? What if I’d called the cops myself? My book investigates those hours after he called and before he was found dead, but it also delves into his entire career as a criminal defense attorney. 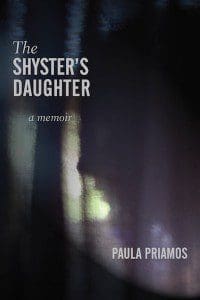 Z: How did you approach the structure of the book? Were you looking to do different things with this memoir that aren’t typical of the genre these days?

PP: I approached the structure of the book with the idea of a dual narrative. One storyline is about a young girl being raised by her father, a big mad Greek criminal defense attorney, and the other is a series of sections titled “What They Told Me After He Died,” which appear every couple chapters. These sections are comprised of quotes from relatives, former clients and other shady people who were in his life, and they reveal to the reader more about my father’s character and what was going on in his life leading up to his death.

I think too many memoirs are expository and tend to ramble on. They don’t use efficient fictional techniques to keep the story moving forward like plot, scene and dialogue. I also think most readers are much smarter than some writers assume them to be, and I wanted readers of my memoir to put the pieces together, to participate in my story, figuring things out along with me.

Z: You resent your mother for leaving you and your father, and then there’s the shadiness of your father’s side of the family. In one memorable scene, you pledge to keep your newborn niece safe from the Priamos side of your family, and at the same time observe your mother’s snooty attitude toward your husband, Jim. How have you balanced, and possibly reconciled, the problems you have with both sides of your family?

PP: I think everybody struggles for balance in a family. What is a functional family? I doubt there is even one out there! They’re all dysfunctional in their own ways. My family is no different. In my book I write about how hurt I was by my mother leaving, taking my older sister and younger brother with her to our second home in Tennessee. But over the years she and I have reconciled. I understand why she felt she had to go in such a sudden way. Hopefully the love I feel for my immediate family translates through the pages of my memoir. I do provide insights in the book on why people in my life did the things they did. I’m not out to vilify them. I expose my own flaws as well.

As for my father’s side of the family, I have very little to do with them, but it’s a choice made out of self-preservation more than anything else. They buried dark secrets and I shed light on them.

Z: You take a striking no-mercy approach in describing your family members’ faults. Why is that?

PP: I don’t know if it’s a no-mercy approach. … A lot of memoirists tend to put people in their books on a pedestal just because they’re dead and I don’t do that. My father made plenty of mistakes. They cost him his marriage, his family, his law practice and ultimately his life. But he was also a great father who loved me and my siblings and taught us important lessons. He taught me to be strong. He once told me in a moment of deep vulnerability that I didn’t know how strong I was and his words have resonated throughout my life. They’ve made me resilient. His mistakes by no means take away from my love for him. I think memoirists do a disservice to the reader when they don’t reveal the whole truth about a person.

Z: Your whole life you have dealt with family members who are afflicted in some way: eating disorders, pedophilia––you even speculate that your father may have been bipolar. How much has your relationship with your husband, who seems to have had his fair share of problems with drugs and alcohol, been informed by your experiences with your family?

PP: It’s been my experience that a lot of people have afflictions, either at surface level or psychologically hidden. It doesn’t mean you have to abandon them or drive them out of your life.  My husband has fought addictions to drugs and alcohol for many years, long before I came on to the scene. I also watched my father drink heavily after my mother left, so I guess you could say I knew a little of what I was getting into when I first became involved with someone who was broken down. But I also saw a creative and interesting person beneath all that pain and addiction.  He needed someone to help him. He was self-destructing. I write in my book that I don’t care how co-dependent it may sound—I don’t leave someone who needs me. I’m steadfast with my close friends as well. It’s the relationship I remain loyal to, not just the person.

Z: You write how at one point someone describes you and your father as “a little team.” Can you describe why you agree with that, and how the “team” aspect of your relationship may have affected the aspects of a more typical father-daughter relationship?

PP: Early on, my father and I were forced to stick together. My older sister and mother were close, so close that he and I felt like we were on an opposing side. It was as if the two of them shared their own private language that my father and I didn’t understand. The bond my father and I formed outlasted every bad thing that came our way. It outlasted my mother leaving thousands of miles away to Tennessee with my siblings. It outlasted one of my father’s disgruntled former clients lying in wait and vandalizing our home. I decided to stay with my father because I was afraid if I went with the rest of my family, he might kill himself if he had no one to come home to.

He and I survived great loss, but we also had great times together. As a kid he’d take me to the Angels games. We’d sit up in the stands, cracking peanut shells and cheering on our favorite players like Rod Carew and heavy hitter Brian Downing. Later, in my early twenties, he was the one who took care of me after I was struck by a car. He’d distract the pain of my healing with Chinese take-out and bad action movies. What was surprising to me was that it took someone outside the family, someone whom I had considered to be not very bright, to pinpoint in one line the complicated relationship my father and I shared.

Z: You live in Southern California. Have you ever thought of moving someplace else, away from the epicenter of your family trauma, or would doing so be akin to your mother’s decision to put 2,000 miles between hers and your father?

PP: I’m a native of Southern California. Nobody is going to drive me away from my own home.  Besides, I don’t know where running away from your troubles ever gets you.

2 thoughts on “A Frank Investigation of Her Family: Q&A with Paula Priamos”