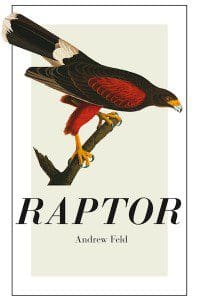 A bold investigation of cruelty, Andrew Feld’s Raptor (University of Chicago Press; 88 pages) illuminates the visceral details of the external world through electrifying, scary close encounters. Feld wastes no time in announcing his provocation: “You wanted a little bit of wilderness / Held docile on your wrist. What could be tamer / Than extinct?” These lines pierce straight through to the locus of a power struggle where the table is turned on a bird tamer, who is probed by accusations of culpability and blamed for razing what he touches.

Feld’s poetry dissects violence and imbues it with drama, provoking the reader to feel the pain of betrayal and the futility of forgiveness for something that is already lost. In “Cascade Raptor Center: Capture,” a boy’s apologies for shooting down a red-tail hawk with his new gun are rendered meaningless, leaving him alone to deal with the shame exacerbated by his father’s fury and with the psychosomatic castigation silence can provoke.

The speaker in Feld’s poems can objectively view the nature of cruelty – which descends from indifference to pain and from the need to maintain power — and see its necessary prerequisite of possession: “our only mutual [agreement] / is the tethering hunger we use to bind our birds // to us and overcome their deep-rooted / abhorrence of the human face.” Here, food is used as a means of control, of transacting with hatred. The speaker understands the supremacy of man over his fellow animals, and intuits the fear they have of him. And though he chooses to ally himself, out of love, with the rapacious birds he tames, he recognizes all the same that his love is not reciprocated, that the love is powerless.


There’s also the speaker’s awareness of his own fraudulence—his guide-talk voice of  “a stranger’s / leading you through the small cell of my self- / consciousness, a voice at odds with its subject, / ingratiating, false.” Under these commercial conditions, not only are there behavioral effects on the birds but also on the tamer. He becomes something other than what he is, someone who has to negotiate between the facts and the feelings. Feld describes a subtle degeneration in the tamer’s relationship to the birds, from human/master to beast/machine. When caged, the birds are rendered helpless, and the small glee the tamer feels before their elegant machinery is reduced to a poignant revelation: he is nothing more than a dispenser of food in the birds’ world. He’s become “elegy’s functionary,” perfunctorily and repeatedly killing small things (asphyxiating mice, etc.) for the birds, the price he pays for a marginal kind of ownership.

Feld casts the falcon (a bird he finds worthy of repeated mention in Raptor) as a symbol of strength, almost deifying it, calling it an “Image of the soul,” and reiterating, “The falcon is the world.” And the world is for the strong. One poem recalls Saint Gorgonius who, in a moment of “historical drift,” becomes prey to Empire’s falcon-like anticipation of error, suffering tremendous physical torment for choosing to ally with Christianity, which extolls the virtues of the weak. One can be sure that the cost of choosing weakness is the forfeiture of one’s survival, but in certain cases, Feld seems to be saying, that this choice becomes an exalted and liberating (if unnatural and terrible) act of self-sacrifice.

We are neither safe from the gory details of Gorgonius’s torture nor, in another poem, the suffering of the victims of Frederick II of Hohenstaufen. They are integral to the vision of Raptor’s speaker: “To see it sharply is all I would ever ask of this world, to show those things that are, as they are.” Which raises the question: does the speaker corroborate the vile Frederick’s vision? Certainly, he seems impressed (as I am), by the nonchalantly itemized hit list of the falcon-obsessed king’s sadism. Conversely, the speaker hates power-worshipping personalities (wanting to kill the candidate who, on the weekends, dons his SS officer getup as part of a “father/son bonding thing”), which gives us some hope about a more redeeming vision.

As Leonard Lutwack notes in Birds in Literature, birds are used as poetic metaphors; as representative of the supernatural; as the trapped, hunted, and killed; and as a link to eroticism. Certainly, Raptor ticks all those boxes. There are poems here mourning the loss of something significant. Ominous lines such as “So long to the great wingèd migration: / Now harbinger, instead / Of spectacle of the world’s renewal” link Feld to Yeats, a visionary who also features a falcon in his poem The Second Coming, which prefigures apocalypse with such verses as “The blood-dimmed tide is loosed, and everywhere / The ceremony of innocence is drowned.”

But there is no redemption here. Raptor is a series of lightning-quick depictions with no time to spare for a casual chat about mercy, and it is made all the more disquieting by its strong undercurrents of moral angst. At the same time, these precise qualities are what hold the attention. They maintain an unyielding clutch on the reader, quietly leveling charges of liability, not only against what we do to creatures of the wild but also to ourselves and to each other as creatures of civilized society.