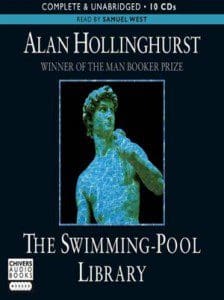 Dear reader, I did not intend to get the audio book. When I walked into the Berkeley Public Library a few months ago, looking for a copy of Alan Hollinghurst’s first novel, The Swimming Pool Library, I don’t think I had intentions toward any particular format. If pressed at the time to reveal my implicit biases, I would probably have said I was looking for a physical, bound paper-and-cloth book, a book-book. (For the sake of simplicity, I will refer to such objects as “books”). Unfortunately, The Swimming Pool Library and The Line of Beauty—Hollinghurst’s Booker prize-winning fourth novel—were both checked out, each with many holds. But the audio versions were available. Without thinking much of it, I checked them out, loaded them onto my iPod and started listening.

Although audio books have been around for years, decades actually, the medium seems in recent months to have taken hold of the popular imagination. Public Affairs publisher Peter Osnos recently predicted a resurgence of audio books on The Atlantic website. And a few months ago the New York Times Book Review ran a pair of essays on audio books (alongside audio book ads from nearly every major publisher). In one of these pieces, John Schwartz defends himself against those friends who think he is “settling for a kind of second-rate reading” by exploring the possibility that he might be “wired for sound.” In his essay, James Parker historicizes the conflict between literature that appeals to the ear and that which appeals to the eye, pivoting on Oscar Wilde’s wonderful and very relevant quote: “Since the introduction of printing, there has been a tendency in literature to appeal more and more to the eye, and less and less to the ear which is really the sense which, from the standpoint of pure art, it should seek to please, and by whose canons of pleasure it should abide always.” Although interesting, these essays (and most other essays I have read on the subject) ignore the simplest, and I think most important factor in all this, the pleasure of listening to a story. Now, I’m not one to bash the physical book—I’m prepared to start printing my own if publishers, in some dystopian future, see fit to switch entirely to e-books—but I also won’t deny the unique sense of enjoyment I experienced when I popped in my earbuds and started listening to The Swimming Pool Library.


Literature is the most intimate of art forms, I would argue, in part because the act of reading filters the author’s words through that small still voice inside the reader’s head. Reading is a kind of silent impersonation and we cannot help but feel some connection to those words we hear inside our heads (or at least, I can’t). Listening to an audio book introduces an intermediary in the relationship, a new voice and a new interpretation. For many, this new voice is a non-starter, an alien intruder in their most private space. While I agree in principle with objections to the “intervening reader who takes command of the entire text” (as Schwartz’s wife puts it), there is something uniquely intimate and comforting about a disembodied voice whispering a story into your ear, a feeling that harkens back no doubt to earlier years when all stories were read aloud. Listening to Hollinghurst, whose novels are rather intimate to begin with, this sensation was only exacerbated. As his narrators recounted their various trysts, musings, and melancholy remembrances, I felt as if I was listening to a friend—an extremely well-spoken friend—tell me all his deepest thoughts and secrets.

Along with this sense of intimacy, audio books offer those of us with headphones an exciting sense of anonymity. Holding a book or a newspaper in your lap, anyone can see what you are reading. With an e-reader, people may not be able to judge you by your cover, but they can still sneak a peek at the text and, at the very least, they know you are reading. When listening to an audio book, those around you have no idea what pleasures are popping in your ears. You could be bopping along to Fleetwood Mac or listening to the latest This American Life podcast. You could be bumping Blue Ivy or Bon Iver, nodding along with Rush Limbaugh or Howard Stern, and no one would know the difference. It may sound silly, but I got a real thrill from the anonymity afforded by the audio book, something akin to slipping a nudie magazine between the pages of War and Peace. Except that in the case of Alan Hollinghurst, the nudie magazine and the great novel were inseparable.

I didn’t realize the extent to which format had dictated my experience of Hollinghurst until halfway through The Line of Beauty. I was in the middle of a particularly engrossing scene when I arrived at my mom’s house to help her install a new program on her computer. I was early and no one was home, so I plugged my iPod into the stereo in the kitchen. The narrator’s voice sounded strange filling such a public space, but I stuck with it nevertheless. In the middle of a particularly juicy description—something about “large rosy nipples” or “his blunt-headed shaft”—I looked up and saw my mother standing in the kitchen doorway, her eyebrow raised ever so slightly. It was only then, the moment my sense of intimacy and anonymity was shattered, that I realized just how unique the experience had been.