Slake, a new, Los Angeles-focused literary journal, put on one hell of a release party for its newest issue on a recent Friday night in Atwater. There were couture food trucks serving gourmet hot dogs and fried chicken. Hot girls serving flatbread strutted around in cute ‘70s cocktail dresses. The Guggenheim guy (Hank, or something) I heard read at Book Party, a West L.A. reading series that no longer exists, was holding court within a circle of smiling blondes. There was an open bar.

It was remarkably lively, in a way I haven’t witnessed since the Rumpus Monthly, a packed literary event in San Francisco run by Stephen Elliott and Isaac Fitzgerald that combines readings, comedy, music and raffle prizes. Joe Donnelly, Slake’s editor and co-founder, is hell-bent on resuscitating the corpse of the lit scene in L.A. with his new baby, into which he’s put his last dollar. Literally.

The writing and art in Slake has two things in common: 1) Los Angeles stories that move and delight, and 2) guts. Take Sage Vaughn’s wistful, compelling paintings from Issue 2, which juxtapose innocence with war. That same issue features edgy, thoughtful and patient stories such as Cindy Carcamo’s “Return to Sender,” a cyclical and sad immigration story, alongside Rachel Resnick’s saucy “Natural Born Butcher.” And Issue 3 has stories that will rock your shit, such as Matthew Fleischer’s “From Mushrooms to Mecca” and Jerry Stahl’s “American Girl,” which contains all things Jerry: creepy, delicious and downwardly mobile stories about your county fair relatives.

I wanted to talk to Joe about the journal. He is overextended and understaffed. Getting him on the phone wasn’t easy. While I flipped off the parking patrol guy who gave me a $68 ticket as I was in a café ordering lunch for me and my coworkers, we commiserated about the golden age of LA Weekly, when Joe and our super intellectual friend Ron Athey ran things there, then talked about Slake.

ZYZZYVA: Can you tell me about your journey from LA Weekly to Slake?

Donnelly: Well, this is going to be a long answer because, well, I’m in the mood. So, let me start by saying that through the soft lens of nostalgia, it’s easy to look at my time at the LA Weekly as some sort of glorious era when then stars all aligned. I’m sure it was something other than that, but there it was certainly a different time. We had money, freedom, smarts and a boss –- Laurie Ochoa (Slake’s co-founder) –- who knew how to let talent, including mine, loose to breathe and grow.


I had come from a pretty straightforward, print journalism background. I’d done various stints, large and medium and small, at dailies such as the New York Daily News, LA Times and Washington Post, and while I loved the adrenaline of a competitive daily environment, I found I often didn’t fit into the institutional/corporate framework of dailies. I loved the work, but didn’t have much taste for the politics of a mainstream newsroom.

I also came to the game late… I was in my 30 by the time I was at the Washington Post, so I wasn’t all that demure. And I drank and smoked, sometimes under No Smoking signs in the newsroom. But I loved doing things that had an impact and that was true of those papers in the early ‘90s.

At the LA Weekly, we were able to marry the ambitious journalism of, for instance, the Washington Post, with a more open attitude toward writers’ voices, perspectives and passions. There wasn’t any “house” style, and we encouraged boldness in writing and reporting. So, I had the freedom to stretch, a mandate to bring in new, relevant voices, and a forum that had some relevance in its marketplace. But we wanted to increase its relevance, make it a must-read and not just for entertainment listings but for its stories.

We did this by raising expectations, both of our staff and of our readership. The LA Weekly was able to transcend the alt-paper ghetto and compete with any publication anywhere. I think that had something to do with the number of national awards, including a Pulitzer for food critic Jonathan Gold, and the financial success it had at the time.

The Weekly came under new ownership several years ago, and they have their own ideas. From my perspective, they involve economies of scale and a lot of debt financing. I started cooking up Slake as soon as the new ownership, with which I had some familiarity, took over. Actually, I’ve had some version of Slake bubbling in my head since I did an internship at the LA Times in 1993. Even back then, I was aware that Los Angeles was underserved by its media. This is one of the most exciting, dynamic and important cities in the world, and how it’s presented to the world –through the LA Times, LA Weekly, Los Angeles magazine — are all beneath it. They’re mostly run by, to be impolite, carpetbaggers.

So, basically, Slake is an attempt to provide Los Angeles with a publication that is worthy of it –- as wide-ranging intellectually and geographically as the city. I’m not saying we’ve gotten there. We’re a tiny operation with no resources. But we’re honest in our efforts.

The quarterly came about because we realized we weren’t going to get money from anybody to start something that would compete directly with the Weekly. All anybody wanted to talk about was online stuff. I would ask these folks, some of them with years of experience in publishing, to name the last online publication start up that made a difference in their lives, and they had no answers.

Meanwhile, I had gone through a divorce, lost my job, my house, one of my dogs, and then one of my dearest friends and was kind of reeling. Oh, and the economy started the crash it’s still not recovered from. Slake’s first issue, “Still Life,” was kind of a personal and universal message of defiance –fuck, I’m not dead yet, neither is good storytelling and neither is the creative and intellectual capacity of Los Angeles. I used the money I made from selling my house to fund Slake. Of course, that money is all but gone and we’re in a precarious position, but I couldn’t wait for permission and just plowed ahead, for better or worse. Probably for better and worse. 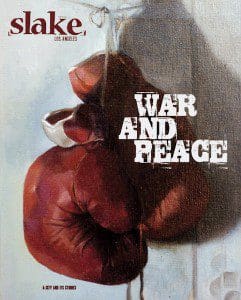 Z: Slake has been referred to as long-form journalism because the stories contained in it are as long as they need to be; not edited short or abbreviated. Tell me about local writers you admire, and why you think the long form is important?

Donnelly: We’re just at the tip of the iceberg in terms of the talent pool here. I admire so many writers and am being introduced to more all the time. There are a lot of young journalists with a lot of passion that Laurie and I helped break at the LA Weekly, and we’ve viewed Slake as a place where we can continue to do that, as well as feature some of our more established writers.

I love the work Natasha Vargas-Cooper did covering the Wisconsin labor strike of this spring. It’s a story that works literally and metaphorically. Also, I’m a fan of historical journalism that has current resonance, such as Hillel Aaron’s piece in the current issue about the 105 Freeway. Sam Slovick, someone we gave voice to in the LA Weekly and who did a stunning series on homelessness for us, continues to inspire. Elizabeth Banicki is also a new voice we broke, and her piece on the dark side of horse racing is moving toward a book. Ben Ehrenreich continues to surprise and impress me. He did a great piece on the border wars in Issue 2, “Crossing Over,” and has a wonderful piece of short fiction in the current issue, “War and Peace.”

Fiction writers breathing new life into a somewhat moribund form include the amazing James Greer, Joseph Mattson, and a couple of newbies, Paul Sbrizzi and Brendan Shallert. I have to admit, I have a soft spot for new discoveries. and I think that’s a lot of what Los Angeles has to offer.

As far as why the long-form is important, I don’t think it’s necessarily about length, but about the experience. So much of what we get is just information processing, little bits and baps without context. It’s cheap and it’s easy, but it lacks context and analysis and it doesn’t help put things in perspective, and perspective is what we need now. Storytelling breeds empathy and empathy breeds better citizenship, and I think it’s all tied up with the fate of our democracy. There’s a deficit of critical thinking, it’s been out of fashion for a long time, possibly since the Reagan era. Everything is emotion-based reaction now. I’m an emotional guy, pretty heartfelt, but you can put your heart in the right place with a little effort.

Z: Will Slake remain a print journal only or do you have any blog or website aspirations?

Donnelly: We have tons of aspirations, but not tons of resources. We’d like the print journal to remain the flagship of what we do, but we also want to provide a faster component through news blogs (coming) and through a more dynamic website (coming). We believe in fast and slow. Balance. We also want to publish books and special editions and things like that.

Z: How often are you going to throw events?

Donnelly: Yeah, we should get into the party business. We give good party. We have a big blowout every issue, which is 3-4 times a year, and we also have a lot of smaller readings and events that are very party-like. We want people to have fun and to foster a sense of community in this sprawling, sometimes unfathomable place.

Z: Do you think fragmented attention spans are killing literature?

Donnelly: That’s a hard one. Statistics probably show that the Internet has done nothing but increase readership, but what type of reading, I’m not sure. I think publishing and readership have sort of failed each other at the same time. You can only ask people to dig deep so many times without rewarding them for their efforts. And people also have to demand more from their publications. I hope we’re participating in that process.

Antonia Crane’s essays have appeared in Black Clock, Word Riot, The Whistling Fire, The Coachella Review, Diverse Voices Quarterly, Rumpus Women Vol 1 and lots of other places. She lives in Los Angeles and blogs at antoniacrane.com.

2 thoughts on “Reviving the Corpse of the L.A. Lit Scene: Q&A with Slake’s Joe Donnelly”