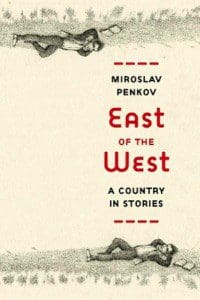 The title of Miroslav Penkov’s debut story collection, East of the West: A Country in Stories (Farrar, Straus & Giroux; 240 pages) is ironic, or maybe wistful —for Penkov’s characters, there is never “a” country. They are Bulgarian immigrants in America, Bulgarian American immigrants returning to Bulgaria, Bulgarians in a village straddling the Serbian border, Muslims in Bulgaria.

In 2008, Salman Rushdie selected “Buying Lenin,” the third story in the collection, for his edition  of Best American Short Stories. The atmosphere in East might remind you of Rushdie, but this isn’t magical realism. There’s nothing truly fantastic in Penkov’s work — the stories are not supernatural but heroic. They take place in a heightened reality, one where high deeds and grand gestures (like buying Lenin’s frozen corpse on Ebay and mailing it to your diehard communist grandfather back in the old country) are not only possible but commonplace. Penkov’s prose is heightened, too — lucid, passionate, and harsh. Incandescent images and violent declarations alternate with bitter sarcasm. But he has a bad habit — like a teenager slamming a door — of ending a paragraph or an internal section with something devastatingly dramatic.


Still, there’s nothing sloppy about East of the West. Penkov’s instinct for structure is apparent, his attention to detail is gratifying. He places angular mirrors in his stories, revealing the huge signifcance of little things only after you’ve forgotten them. The title story begins with narrator Vladislav standing on a Beograd sidewalk. “A moment ago, a Serbian cabdriver spat on me and I take time to wipe the spot on my shirt.” Vladislav gives us no reason to think that being spit on by a Serbian cabby is an occurrence worthy of notice — abruptly he hurtles us back thirty years, to his childhood in the divided village of Staro Selo. After the Balkan wars, the western half goes to Serbia, the eastern half to Bulgaria. On the bank of the river that bisects the village, a young Vladislav argues with his cousin, Vera, whose family lives on the western side. He tells her she talks “Serbianish.” He says, “The only Bulgarian here is me.” Years later, Vlad gets fired from his job in a coal mine. His new boss, from some big city in the east, tells him with a shake of his head, “I can’t understand your dialect. Too Serbian for me.” So naturally Vlad punches him in the face. The end brings us back around—Vlad has pursued Vera, the love of his life, to Beograd. The cabby spits on him when he’s unable to answer the question that gets batted back and forth throughout the story: Serbian or Bulgarian? “If you’re Serbian, that’s fine. But if you’re a Bugar, it isn’t. It’s also not fine if you are Albanian, or if you are a Croat. And if you are Muslim, well, shit, then it also isn’t fine.”

The narrator of “East of the West” is typical of the pieces in the collection. Besides being a Bulgarian man, the Penkovian hero is tough in a wounded, suspicious way. He is hapless, slightly bewildered (but not so much that he can’t crack a joke) by his bad luck, by how differently from what he imagined everything turns out: the move to America that leaves him depressed and homesick, the early talent that never amounts to more than a parlor trick, the girl who finds someone else. The collection coheres in a way most anthologies don’t, perhaps because the stories are close to one another chronologically. (At 29, Penkov hasn’t had time to go through different “periods” yet.) But it can’t be accidental  that the first and last story mirror one another, bending the book into a parabola like a piece of flexible wood: Penkov is too skilled an architect.

The narrator of “Makedonija,” which opens the collection, finds a parcel of letters from his wife’s first love among her things. He swallows his envy and reads them aloud to his mute and immobile wife. The letters, written from the front, prompt the old man to tell the story (but only to us — only internally) of his long-dead brother, who took to the hills to join the partisans. He says, “At my age, a story stirs up a vortex that sucks up into its eye more stories, and spits out still more.” That vortex manifests literally in “Devshirmeh” as a Texas tornado. Fleeing the storm in a rickety truck, the narrator holds reality together by telling a story — holding his daughter’s attention, keeping her from fear. Both men spin their yarns with Scheherazade-like desperation: because it’s all they have to offer, and because they’re not sure what will happen when the story ends.