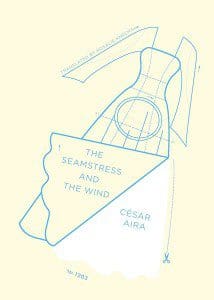 César Aira’s The Seamstress and the Wind (New Directions; 144 pages), translated by Rosalie Knecht, is simultaneously minimalist and epic. Aira’s voice is clear, his characters are palpable, and his ideas — elucidations on literary theory, existential ruminations, and thought experiments — are evocative and infectious. The story, which concerns a seamstress and her husband who travel the Patagonia desert in pursuit of their accidentally kidnapped son, careens with each chapter at dizzying speed. Seamstress might be thought confusing and possibly incomplete, because the story’s inciting incident — the kidnapped child — goes completely unresolved, even forgotten by the seamstress and her husband. But that is the point: It’s part of Aira’s style; he is mysterious without obfuscating.


Aira, who has authored more than 70 books of fiction and essays, practices a style he calls fuga hacia delante (“flight forward”). Once a scene is written, he refuses to edit or alter it. So if he has trapped his characters in a desert, such as in Seamstress, then the desert must serve. That’s how you wind up with one of those stranded characters having to build a vehicle out of a fossilized armadillo husk and the spare parts from a car wreck. It seems Aira doesn’t expect us to hunt down the “meaning” of an armadillo-car, or even find it credible. He wants us to enjoy the performance of the narrative, to revel in and explore the mystery and craft of his imagination. The Seamstress and the Wind isn’t so much a piece of fiction as it is an improvised performance.

Like all great improvisations, Aira’s narrative follows a strict self-imposed structure. The first paragraphs of the book articulate Aira’s interest in building several plot lines that should converge pyrotechnically in the story’s final moment. This is exactly what he achieves, despite disparate story lines and seemingly insurmountable obstacles. Also like great improvisation, the book is completely self-aware and self-referential, often to delightful effect: “I keep searching for the waiter’s gaze …” he writes. “I don’t know how I can be writing this, if I’m not taking my eyes off his head.”

Setting these gymnastics aside, Aira’s at his best in his existential ruminations. Seamstress appears to serve as a thought experiment by which these ruminations may play out. One such insight poetically frames the conclusion of the story, a conclusion in which none of the story’s conflicts are resolved. “To be practical about it,” he writes, “and drop the metaphysics…I’ve stood on the threshold of all the beauties, and all the dangers. And the sums did not add up. The remainders did not remain, the multiplications were not multiplied, the divisions were not divided.” In this way, Aira reveals Seamstress’s burning heart, a weathered man reflecting on life’s majestic messiness.

The Seamstress and the Wind creates and is created in an experience distinct from that of conventional contemporary fiction. It challenges the reader. This seems to be Aira’s intention. He has stated his characters don’t matter to him; they are only functions of the plot. If we surmise that the plot is only a function of his ruminations, then why does he bother with the artifice of story? After all, the most echoing phrases of the book are those in which Aira speaks directly to his readers. Unwrapping Aira’s improvisational literary performance to get to that thorny question is what makes his work both difficult and rewarding.