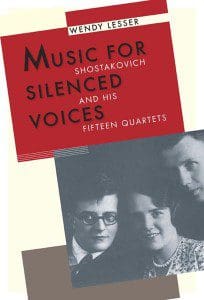 Before he could reach the keys of a piano, Dmitri Shostakovich showed a secret interest in music. “When our neighbors played quartets, I would put my ear to the wall and listen.”  As Wendy Lesser points out in her new book, Music for Silenced Voices: Shostakovich and His Fifteen Quartets (Yale University Press; 368 pages), this image — of the composer as an eavesdropping child — is an apt one for an artist who spent his life under surveillance by the Soviet regime.

In her ninth book, Lesser, founding editor of The Threepenny Review, argues that the man best known for his cacophonous symphonies may be better understood through the chamber music he composed in later life.

“A secretive figure behind a public mask, he had chosen the string quartet, it seems, as his vehicle of self revelation.” Certainly there is an obvious intimacy in an ensemble comprised, most often, of cello, viola and two violins. But Lesser goes further and suggests Shostakovich was drawn to the “Athenian democracy” inherent in such a group, which has no conductor.

The larger-scale works, she writes, “were most subject to interference by the Soviet authorities. The interference was internal as well as external: that is, Shostakovich often censored himself, distorting and suppressing his own talent in order to write the kind of pieces that were demanded of him as a public artist.”


This view of the simultaneously suppressed and self-censoring artist is central to Lesser’s analysis of Shostakovich. In the process of putting him and his quartets on the couch, in chronological order, she finds nothing less than an “autobiography in fifteen chapters.”

By the late 1930s, many Russian composers, including Stravinsky and Prokofiev, had fled Stalin’s repressive and increasingly savage regime. Did Shostakovich risk more by staying? To survive, he composed ceremonial music and film scores on cue, and signed documents denouncing traitors. For that reason, or in response to an inherent quality of irony (he called it sarcasm) in his music, there are those who will neither record nor perform it, even today.

In the face of this history, Lesser mounts a tightly-focused argument. “The choice was narrowed to silence or capitulation,” she believes. For the man she portrays as a deeply rooted Russian and averse to transplantation, this was no choice at all. “That kind of silence was never a real possibility for him. If he was not a composer he was nothing.” Yet the book is not an apologia; Lesser details not just the ambivalence but the shame she hears in the work.

The seas were rough; Shostakovich weathered public interrogations and official denunciation, first by Stalin, who condemned as “formalist” his 1934 opera, “Lady Macbeth of Mtsensk District.” Based on an eponymous novel, that opera was banned for 30 years, during which time the composer wrote ever more abstract and codified music, incorporating cryptic references and even his own signature note-sequence, which invited some to treat the scores as Rosetta Stones. Happily, Lesser avoids such microscopic and specialized exegesis. What is there can be heard, she believes, even by a non-musician such as herself.

On the odd occasion, Lesser’s erudition can chafe. In response to a particular violist’s literal interpretation of a typically opaque (she calls it “mordant”) statement by Shostakovich (“Life is beautiful. All that is dark and ignominious will disappear. All that is beautiful will triumph.”), she writes: “Only someone who cannot adequately hear Shostakovich’s intentional distortions and dissonances, I think, would take this simplistic tagline as indicative of the ‘directness and sincerity’ of the ‘message’ in any of his serious works.”

Still, even her prickliest opinions feel earned, so their expression can’t mar the fact that Lesser writes beautifully about music, even when addressing the near-impossibility of the task. “You can never definitively find the hidden springs of an artwork; you can only attempt to grasp the results as they gush forth, and with music, which is nearly as changeable and bodiless as water, that grasp will be especially tenuous.”

Lesser guides the reader through the history of Shostakovich’s various musical alliances — particularly his beloved Beethoven Quartet, for whom he wrote those pieces — and into the sonic landscape as well. Deft detective work brings musical examples of the composer’s essential doubleness to life.

She notes ominous echoes. The “three knocks” that recur, for example, in the Seventh, Eighth and Thirteenth Quartets, may represent the sound of the secret police, a fear that may have never disappeared for the composer, who lost friends in the purges, despite his privileges and responsibilities.

“In a period like the one Shostakovich lived through, the right to feel and express sadness takes on a political dimension. I am not saying that Shostakovich wrote mournful music as a gesture of protest. He wrote it for numerous indecipherable reasons of his own,” Lesser writes. “Among other reasons, he wrote it because it gave him the opportunity to tell the truth.” Shostakovich is a figure out of Kafka – exceptional, disguised, in constant struggle between his own central truth and the false self he must perform to survive.

In her epilogue, Lesser writes, “What brought me to the quartets to begin with, I think, was that I could feel a voice speaking to me through them.” Readers of Music for Silenced Voices can be grateful she brought her native vigilance and discernment to bear as she sought out the man within the art.

Heidi Benson, a former journalist, is a student in the MFA Writing Program at the University of San Francisco.