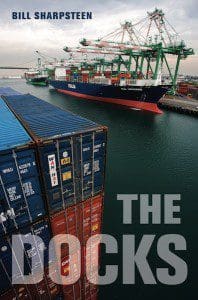 The Port of Los Angeles has earned the not so inviting nickname of the Diesel Death Zone, due to the tons of particulate matter it produces. Yet it’s a facility of such monumental importance, that if disrupted the disturbance “would cause an economic heart attack for the country.”  The Docks (University of California Press; 341 pages) is Bill Sharpsteen’s wildly enlightening trek through this mammoth, messy, and mesmerizing spot.

A journalist and a photographer who possesses a penchant for stories with heft, Sharpsteen honed his narrative skills in Dirty Water: One Man’s Fight to Clean up one of the World’s Most Polluted Bays. Working landscapes often melt into everyday consciousness without revealing much about their inner workings. Prior to writing a magazine article on female dockworkers, Sharpsteen paid little heed to this behemoth tucked between the Southern California cities of San Pedro, Wilmington, and Long Beach.


“I have to admit, after living in Los Angeles for more than ten years, the port was nothing more than a bit of economic DNA until 1998, when I sneaked onto a pier posing as a longshoreman wannabe …” Those early contacts would later prove valuable in gaining access. Many parts of the port are behind locked gates for security, safety, or secrecy reasons.

Like the best oral histories, Sharpsteen introduces his cast of characters, then steps out of the way, letting them tell their own stories. He deftly weaves his clear and entertaining observations about arcane activities with “the perspectives of people who have seen the same things for years and have a pretty good idea what it all means in the larger — and smaller — contexts.”

Readers first meet Captain Ron Rogers, a port pilot who routinely shepherds the monster container ships, piled high with thousands of shipping containers, into the harbor. Sharpsteen rides along with him as he enters the port. “The experience,” he writes, “should give me a picture to paint that involves people and not just tons of steel.”

Employed throughout the book, this method invites us along on a journey. Sharpsteen presents Geraldine Knatz, the port’s female executive director; Los Troqueros, owner-operators who people the drayage industry, hauling tons of  cargo across the country, or to downtown Los Angeles.; Art Almeida, a  retired hold man who once  “toiled in the pits, down in the ship’s shadowy lower decks where the real work was done, all backs and elbows.”

He devotes three chapters to demystifying the environment, a “complex totaling 10,700 acres, more than 15 times the size of Central Park.” After his descriptions of the jaw-dropping facts of this commercial juggernaut, Sharpsteen’s aerial photos might seem superfluous, but they are astonishing in their own right. He delves into the port’s labor history, chronicling its events and personalities since the 1930s. And Sharpsteen captures the port’s rugged working environment and its evolution since 1974, when Gretchen Williams secured employment as the first female casual clerk. The Docks skillfully teases out the port’s role within the global economy and how every American depends upon the people who make it work.

Julie Foster is a writer and book reviewer in Sacramento.