‘A Little More Red Sun on the Human’ by Gillian Conoley: New Universals for a Secular World 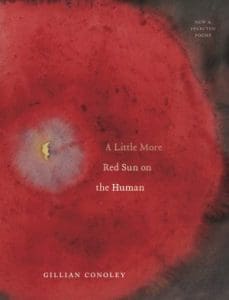 Gillian Conoley’s new book, A Little More Red Sun on the Human (320 pages; Nightboat Press) is a collection of selected poems from throughout her career. Conoley uses new forms of linguistic constructions to tackle the spiritual adversity of the modern age and to redefine the standard of poetic consciousness. Conoley was born in Austin, Texas in 1955, and the farming community she grew up in inspired the narratives of her early works, in which she recalled her childhood in the South. Her youthful reminiscence later evolved into an interest in the natural world, and became a tool for her to perceive certain aspects of nature anew.

Many other themes occur in Conoley’s early writing: she uses the analogy of adolescence and language itself to explore aspects of metaphysics and the relationship between the body and spirit. She refers to herself as a “native” within her own body, as well as to the external world. Her poems are difficult and open-ended, though rewarding if one reads with caution and precision. After reading and re-reading many of her works, I ultimately came to the conclusion that language itself is the metaphor her poems mean or lead to. She uses urban slang, spiritual undertones, and scientific terminologies to dramatize the artist’s struggle to define the bigger picture in a world that’s constantly being redefined by science and cultural change.

Despite the immensity of such a challenge, Conoleys’ poems are simplified in their particulars. In “The Ancestors Speak,” she makes the personae of her bloodline the speaker of the poem, which talks to her spirit as if the internalities of the body were a God of their own:

We are the great gang

Of men and Women

We are your fatted cells,

Your hot blood and bruise.

You are our Modern Zygote

To a modern reader, these lines seem to answer the question Andrew Marvell asked in his 17th century poem, “Dialogue between the body and soul,” which loudly cries: “O who shall from this dungeon, raise / a soul enslav’d so many ways?” Centuries later, Conoley answers this existential cry, claiming that the spirit is not held captive by the body but rather the body is the spirit’s source of life. From these lines, one can also see how analogy governs the poem’s implications, as the cells of the body refer to themselves as a gang who run in our veins. Conoley’s dry sense of humor shows us that, even from the standpoint of the cells, the anxiety of mortality persists.

The aesthetic quality and sophistication of these poems has the potential to bring solace to those who obsess over redefining the human condition in a constantly changing world. The poems teach us how spiritual revelation might be attained in the present, without having it belittle the importance of divine acquisition, even while many of Conoleys’ poems cede authority to the knowledge that comes from science. The 20th century poet Hart Crane stated, “Analysis and discovery, the two concerns of science became conscious objectives for both the poet and painter,” a claim that illustrates how the sciences not only secularized the modern world, but also altered the nature of poetic consciousness. And now, in the 21st century, Conoley has risen to the challenge and successfully restored spiritual sentiment through her representation of science as an aid to existential crisis.

She also uses the representation of modern dialect as a medium to convey the psychological struggle of trying to express what we can’t put into words. Through this search for assertiveness, the poet uses her childlike naivety to attain a secret bond with the natural world: “After your wordlessness after loping / from fields that won’t hide you / … you will enter the trees, their music, / and crush leaves to your ear / as when you slept,” indicating that we are more exposed to nature in moments of playfulness than we are in a restless state of contemplation. In her poem “Premature Reincarnation,” she acknowledges the limitations of the mind and how vulnerable we are to those forces outside our control:

There will be days of limit,

But soon your legs will strengthen

And your arms tire and hang

Into a house, discover

The hideous grass between your teeth.

Through Conoley’s poems, we are reminded that, while we may often feel like the rulers of our universe, there will be days when we do not, and we must embrace the playfulness that arises when we aren’t so busy keeping track of time. The poet’s duality between frolic and wit shows us that we stifle ourselves when we constantly try to control what we feel, perceive, and expect in life. Through their inventive retrospection, Conoleys’ poems create new universals for our secular world.