The following is Laura Cogan’s Letter from the Editor in our new L.A. Issue. You can purchase a copy of Issue 119 from our Shop page:

Though Los Angeles occupies an outsized space in America’s (and even the world’s) cultural imagination because of the film and television industries, its literary culture is comparatively overlooked or minimized. Here on the West Coast we are busy enough going about our work that it is easy to forget for long stretches at a time the still significant East Coast bias in publishing. And then every so often someone in New York sends up a flare of disdain, a subtle or overt reminder. But the West Coast in general, and Los Angeles in particular, have nothing to be defensive about, nothing to prove. Our literary culture is evident from the sheer number of immensely talented writers doing their work here. To wit: at 312 pages, this issue spotlighting L.A. writers and artists is our longest yet, and, were the cost of freight not a consideration, we could gladly have included more work. (As it is, we rely entirely on the USPS and its affordable shipping rates to keep sending this journal out into the world—a subject of some concern as I write this in September.) And  while  much  is  made  of  the  cultural  differences  between ZYZZYVA’s hometown and Los Angeles, I’d like to think that such tensions are more generative than they are antagonistic; that the frisson of competition between NorCal and SoCal, while genuine, also sparks creativity and inspiration.


Moreover, in this climate it feels especially urgent to reject the insidious notion that all resources are finite and depleted and we must battle each other fiercely for survival. Today, California is ablaze, with over two million acres charred by wildfires. Meanwhile, our state continues to struggle with the myriad consequences of the pandemic. It’s true enough that we are fighting for our lives; natural enough to feel we are, each of us, on our own. But in the shared experience of this prolonged season of peril, our communities are also bonded.

In truth, we are each other’s community, each other’s audience, each other’s readers and subscribers, teachers and students, critics and boosters. No matter the challenges of the literary ecosystem, we should be able to count on each other for generosity of spirit, time, curiosity, and attention.

Representing Los Angeles and SoCal writers has always been part of this journal’s mission—as our index of published authors easily attests: for decades we’ve published writers such as Wanda Coleman, F.X. Toole, Jim Gavin, Lou Mathews, Dana Johnson, Héctor Tobar, and too many others to list here.

For all these reasons, we believe an L.A. issue only makes sense, the perfect duet with our celebration of the Bay Area last winter.

Many of the Bay Area issue’s themes harmonize here: abundance and deprivation; loneliness in a crowd; urban beauty in close proximity to human degradation; the agonizing grind of carving out a creative life in a financial center. The variety of voices demonstrates L.A.’s unquestionable depth of talent. Henry Lara’s photography and reportage gives us the opportunity to see the faces and hear the stories of the most overlooked Angelenos. Michelle Latiolais captures the poignant quotidian heartaches of trying to live a dignified life in a crass world. A. Kendra Greene takes us on a tour through an idiosyncratic museum of the Holy Land, open by appointment only. Tom Bissell’s essay explores the intricacies and limitations of adapting literature for the screen, in general, and doing so with Nabokov’s thorniest work in particular. And, to celebrate his centennial, this issue opens with a now-classic story by Ray Bradbury, a short, prescient gem (first published in 1951) that speaks eloquently to so many contemporary concerns.

Whether L.A. is familiar territory or only known to you through the screen or the page, we hope you’ll find this time capsule of 2020 Los Angeles writing as diverse, excellent, and creative as that eternally iconic and enigmatic place itself. 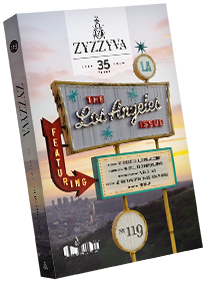 “The L.A. Issue: Letter from the Editor” by Laura Cogan was published in ZYZZYVA No. 119. Purchase the back issue in our shop.