The first time I see her, she is buying cold cream. What she wants, she says, is a moisturizer that doesn’t feel heavy, doesn’t sit on her skin like so much weight. I lay out her options: whipped argan oil, cold-pressed and refined; our new micro-beading exfoliating lotion with gentle 7 percent alpha hydroxy; the best-selling hyaluronic acid-plus-B-vitamins gel with all-day-stay technology, patent pending. Her red fingernails tap the counter as she slides a credit card with her other hand. She buys all of them.

A few days later I see her across my booth in the shoe department. She comes once a week, during the day, like so many other women. She wears Balmain jeans. I know about Balmain jeans from a Kid Cudi song. She wears red-soled heels and carries a snakeskin handbag. Looks like she smells of Chanel Nº 5, no, something even more expensive, that Jean Patou thousand-dollar bottle with ambergris from sperm whales and eight thousand jasmine flowers. I make ten dollars an hour, but I’m so close to wealth its lexicon roots in me. The woman reminds me of my mom when I was very young. The woman reminds me of my mom if my mom had been wealthy. You’re simply and unobtrusively classy, like a Céline bag, I say to her in a daydream.

My boyfriend is a pharmacy technician. For months he’s been slipping Roxicodone pill by pill in his socks. Easier than anyone would think, he says. I’m afraid of addiction, I’ve seen what it did to my parents.

But he’s slipping from me, and we’re starting to live in two worlds. Our relationship tastes of hillbilly heroin, itch, comforter covers tucked to the chin. Live this with me, he says one day, and I crush a tab and snort it. It feels like we are sitting by the ocean wrapped in towels, and when he holds my hand it feels warm and slippery like a velvet jellyfish or maple syrup. I wait for him to say he loves me but he doesn’t.

The woman’s husband comes around Christmastime. By then I’ve been high every Friday, and it’s a Saturday after. After is slow and sad, a vessel sucked dry. The woman’s husband is handsome, with legs too spindly for his body, like a gazelle in a suit. She walks him to my counter and says he needs a cream for his dry skin but nothing that smells flowery. Then she walks away to browse shoes, and I tell the husband about our line of men’s products in blue-black containers that suggest sailorly conquest and rapacious strength. I’m sorry for my wife, the husband says, she sounds so dumb sometimes. I do not know how to respond, so I say do you use a daily antioxidant to battle signs of premature aging. He frowns and walks away. I place a hand on the cold glass counter and picture it cracking under my weight. I am thin and wispy like a bowl of feathers, like crumpled paper tumbling in the wind. Nothing cracks in my presence.


The next day the woman is back with her husband. He holds her bicep, his knuckles red but not cracked like my boyfriend’s. I know his hands would be soft in mine. Hers, too.

I thought you bought a moisturizer yesterday, the woman says. She fiddles with the ring on her finger. I thought yesterday I brought you— We didn’t come here yesterday, honey, the man interrupts.

No, we did—I mean I think we did—and I said you didn’t want anything flowery, the woman says.

Honey, the man says, the fact that you keep imagining these things is really starting to worry me.

He smiles at me and the smile is so warm I imagine a stone that sloughs the dead skin from my body.

I am so sorry, the man says to me, and I want his hand gripping my bicep, too. When he buys the cream in the blue-black container, he does what no one has ever done for me—hands me a tip, fifty dollars. You’re beautiful, he says, and his wife looks away.

The woman still comes alone during the week. But now I notice what I hadn’t before. Her eyes are red-rimmed like my father’s when he was dying of cirrhosis of the liver. Her hands tremble each time she picks up a shoe to inspect it. She is forgetful and often buys the same product she bought a day before or returns something she already has. She apologizes so often I begin to call her Mrs. Sorry to myself.

I don’t see the husband with her again until after the holiday season, until after my boyfriend loses his job. I see them together the week my boyfriend is caught by his boss. He paces the whole week yelling and throwing things. He is afraid he’ll be arrested. Two days after his last dose he is sweating and shaking and curled like a fetus on soaked sheets until his friends bring him a syringe of real heroin and he is okay again. It is the beginning of the end for me but I don’t know this yet. We are headed to hell hand-in-hand but I don’t know this yet. I just know the husband with his wife standing before me and the husband says, she doesn’t want to get an eyelift even though I tell her she looks awful with all those wrinkles. He tells me I’m pretty again and says, give her something that will at least make it better. I lay out the options on the counter and the woman looks from one bottle to the next and her eyes begin to water and I beg her in my head please don’t cry please don’t cry please don’t cry. She doesn’t cry. She doesn’t buy anything. The next day when they show up again she’s wearing dark Jackie O glasses and try as I might, I can’t see her eyes.

I thought I came here, she says, her voice shaking. I thought I— She doesn’t want to get an eye lift even though I tell her she looks terrible, the husband says.

When the woman walks away, the husband hands me a blue-black container in its package and says, Also I would like to return this.

I say, You didn’t buy that here. We don’t sell that here.

Yes you do, he says, I see it right behind you on that shelf. I have the receipt, he says.

Gabriela Garcia’s novel, Of Women and Salt, is forthcoming from Ecco/HarperCollins. You can read her work by purchasing Issue 116 from our Shop page. 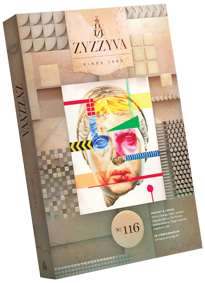 “Mrs. Sorry” by Gabriela Garcia was published in ZYZZYVA No. 116. Purchase the back issue in our shop.