New writing from the East Bay to San Francisco, from the North Bay to the Peninsula

“This Is Why We Can’t Have Nasty Things” by Charlie Jane Anders: “San Francisco used to have a million pockets and folds in her long flowery skirts, where the strange and barely loved could create their own reality. But lately, not so much.”

“Andi Taylor vs. Artemis Victor” by Rita Bullwinkel: “The fact of the two girls’ bodies was not lost on Artemis Victor or Andi Taylor or on any of the young women in the Daughters of America tournament. Their body was the only tool they had at their disposal.”

“Island of Beginnings” by Lydia Conklin: “Sometimes Posey forgot that she’d emerged on this side of her marriage middle-aged. That she’d grown a potbelly and her hair was stringy from years of dying it what she had thought until recently was a striking crimson.”


“Ring Around the Equator, Pockets Full of Acres” by Chia-Chia Lin: “It mimicked her life at work, when she calculated the hours until lunch, or how much of the day was left, or how much of the week or year. But her new athletic life was a different kind of life. A second, better life?”

“Strangers” by Nina Schuyler: “Then I heard the coyotes howling—they were always moving, large packs at night, displaced from the never-ending construction. I imagined them sprinting on the dirt paths like veins on the hills, illuminated by the moon, sprinting to catch a rabbit, a mouse, sprinting for the sheer pleasure of sprinting.”

Paul Wilner on Lowell High School and youthful literary pursuit, Gloria Frym on the wide resurgence of a late writer and beloved friend’s work, and Lydia Kiesling on the grasping for home, and its slipping away.

Dodie Bellamy and the late Kevin Killian—stalwarts of the New Narrative and the unconventional life—on poets, art, and San Francisco.

The notebook sketches of Lawrence Ferlinghetti (introduced by Mauro Aprile Zanetti) and the photography of Janet Delaney (introduced by Nathan Heller).

You can purchase a copy of No. 117 here, or order a subscription to ZYZZYVA now and we’ll start you off by shipping you the Winter issue. 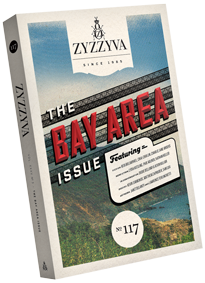 This and many other back issues

Purchase your copy of this issue, ZYZZYVA No. 117., in our shop.