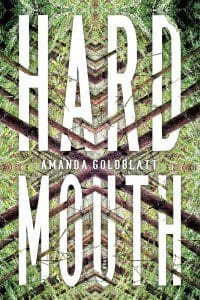 When Denny, the twenty-something narrator of Amanda Goldblatt’s first novel, Hard Mouth (242 pages; Counterpoint Press), flees Washington, D.C., for a mountain cabin to avoid witnessing her father’s final cancer-ridden days, the reader hesitates to judge; after all, who’s to say we wouldn’t do the same in Denny’s place? We all grieve in our distinct ways, and in that regard Denny’s choice seems as sound as her father’s to reject treatment for his third round of cancer. After ten years of watching her father slowly decline, she realizes, “I needed an out…I did not yet understand that courage was unrequired in making such a decision. Only a dynamic cycle of folly, and an inability to break same.”

Although Denny tells no one about the cabin, she does not leave the city alone: sporadically making himself known is her invisible friend, Gene, a sort of vaudeville comedian with a long string of ex-wives and a habit of making his opinions known. Denny realizes her imaginary companion is just that, but, unable to connect with her co-workers and on edge from the stress at parents’ house, she finds Gene’s boisterous presence a welcome counter to her isolated existence. “I know: Gene was there and not,” she shares. “Like faith, or air. I only believe in one of these things, but—he was a modern convenience, a thing that you could use unthinking, on most days.”


Despite her impulse to flee from the dreariness of urban life—the rude passengers on the subway, the stifling crowds and empty chatter during happy hour—Denny would scarcely classify herself an outdoorswoman. “I am not a naturalist. I only wanted to leave,” she states. “…this wilderness walking was just an unremarkable commute. There was a greenish vestibule, a gray and gray and brown vestibule. I moved through this landscape like a mall-walker in poor condition.”

Still, a desire to leave the world behind does not alone mean one is equipped to survive in the wild, and much of the tension and excitement in Hard Mouth comes from watching Denny—in many ways, an average millennial—fend for herself against the unexpected developments that arise: sudden rainstorms, hostile animals, and the arrival of a suspicious guest named Haw. Even as Denny forms an attachment to an injured cat she calls Thingy, and less so to the potentially dangerous Haw, there remains at the back of her mind the notion that, in many ways, her sojourn to the middle of nowhere has been a death wish. “I wanted to be dined upon by some animals,” she admits. “What better penance could I offer to the world?”

Hard Mouth recasts the traditional adventure novel as an intense psychological portrait of contemporary malaise. Unlike so much writing about nature, the book remains decidedly unromantic. For whether she’s stranded in the depths of a mountain cave or yelling at a man-spreader back on the subway, Denny’s first task is to contend with herself. The narrator’s troubled mind is laid bare on every page through Goldblatt’s unflinching gaze—there’s little glamorous about Denny by the time her journey leaves her half-naked and caked in mud, but she is vividly real. And the pain of witnessing a loved one’s slow degradation is rendered excruciating enough for us to believe Denny would prefer the physical hardships of repairing a torn roof or scaling a watchtower in a rainstorm over having to say good-bye to her father. Grief can do that.

But Denny finds “the secret was that no matter what I did, I was alive,” and life is waiting for her on the other side of her mountain excursion. Along the way, she might be shaped for the better through tending to the wounded Thingy, letting go of the phantom Gene, and confronting Haw. For Denny, her journey is brutal but rewarding. For readers, though, Hard Mouth is all reward.