We’re officially in the Dog Days of Summer now (speaking of which, have you seen the literal Dogs Days on our Instagram?). We’ll be sad to see the summer go, but before the season departs—here’s a roundup of the works we’ve been reading, watching, and listening to: 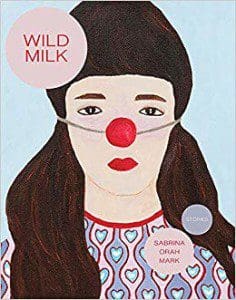 Scout Turkel, Intern: Wild Milk (166 pages; Dorothy, A Publishing Project), the first work of fiction from poet Sabrina Orah Mark came out in October of last year. Fall seems almost too appropriate a season to mark the birthday of this haunting collection of short stories. Surrealist, creeping, and piercingly sweet, Mark’s stories unfold like incantations: each so arresting and vivid, it must conjure something. But what? Concerned with painful histories, trauma, political malfunction, and intergenerational connectivity, Wild Milk represents through distortion. In “For the Safety of Our County,” the book’s seventh story, “a new batch” of Presidents are brought into the White House in a sequence both quite funny and nightmarish:

The dreamlike motion of Mark’s prose here is indicative of how Wild Milk approaches both story and critique: not from the position of revelation through explanation or uncovering, but rather by seeing what wells-up when image, language, and cadence are privileged over drawing conclusive conceits. The method seems, to me, undeniably poetic, which makes sense; I first discovered Mark through her verse, specifically her 2004 debut collection The Babies, which is as profoundly beautiful and deeply ominous as Wild Milk. I think this flirtation with verse and distinctly poetic methodology is why I love Wild Milk so much—the book is categorized as fiction, but so much of it feels like a love letter to poetry, be it highly aware of the latent and explicit histories and violences which lurk around the form. In “Clay,” Mark writes:

I was wrong. The man / in the flowers is looking around. He is rising up. / Maybe he would like to share / your colored clay? I’m sorry, Son / I’m just a poet. I hope this is enough.

I didn’t add slashes to denote line breaks, that’s exactly how Mark wrote it. Even in its structure, Wild Milk plays with, and challenges, the distance between poetry and prose. I love the moment of apology too, as if the work itself knows that its stories can be, frankly, confusing, at least when measured against the expectations for commercial fiction. If you want to try something genre defying, radically awake toward the world around us, and earnestly tender, pick up Wild Milk. If it is fiction, it’s fiction that listens very, very well, which is an endlessly special thing to witness. 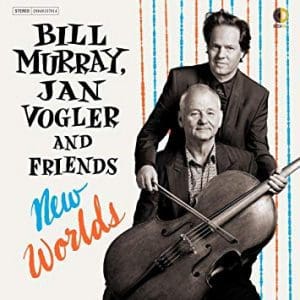 Julia Matthews, Intern: I almost wish I wasn’t making this recommendation, because the experience of stumbling unexpectedly onto Bill Murray and Jan Vogler’s theatrical album New Worlds is just shy of magical. In what began as a live show, Murray—alongside a trio consisting of cello, violin, and piano—performs recitations and songs. The album, which came out in 2017, feels too impossibly timeless to have been produced only 2 years ago. New Worlds is a carefully curated experience—musical and literary discoveries and pairings are transferred into a visceral impression of Americana in its contemporary relevance. The palpable energy of the classical trio lifts Murray’s beautiful, paternal, chameleon voice, and occasionally drowns him out in favor of the swell of music.

The album’s first track, “The Carnival of The Animals, R.125: The Swan / blessing the boats,” was my first encounter with New Worlds. As I listened, I felt its blessing was intended for me, in all the particular ways I needed one, even as Lucille Clifton’s words address anyone, or everyone. With this piece enters the motif of water that glides throughout the album. In “Song of the Open Road / Song of Myself,” Murray reads Whitman’s poetry unaccompanied, slowly and with great thoughtfulness. The words urge transience, bridging the tranquil opening blessing with the coming adventurous journey. In “Piano Trio No.1 In B Flat, Op.99 D.898: 2. Andante un poco mosso / The Deerslayer,” Murray reads James Fennimore Cooper’s text as an inquiry into the place of humans with respect to nature. The narration looks upon undisturbed wilderness as a relic in the age of the frontier. Murray’s renditions of “It Ain’t Necessarily So” from George and Ira Gershwin’s opera Porgy and Bess and Van Morrison’s “When Will I Ever Learn to Live in God” introduce the complicated nature of doubt and instability in faith alongside the simple joy of making noise. Murray’s brilliant voice acting features prominently throughout the album, particularly on one of its most powerful tracks, “Moon River / Adventures of Huckleberry Finn,” which asks: Where does individual consciousness live in an unjust system, and what do we expect of those who dwell within this system?

In New Worlds, find replenishing comfort in art that is plainly earnest. However, consider not only the content of the texts and music that Murray and Vogler bring to life, but the historical American realities that informed the original artists’ intentions as well. 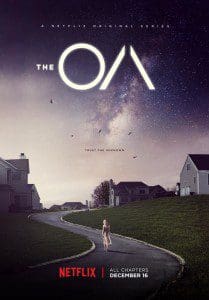 Laura Cogan, Editor: Back in March I mentioned to Josh Korwin (our production designer) that I was searching for a new show to watch. I had a vague and impossibly specific idea of what I wanted: something immersive that would require a degree of focus. Something serious, but not gritty or violent. Something invested in ideas about contemporary life, but not play-acting with the same frayed topics of the daily news, chasing headlines. He helpfully suggested The OA, and I promptly forgot all about it. Until a couple months later when the dreariness of the TV landscape combined with the anxiety of a particularly dreadful news cycle somehow brought it back to mind. Through the first episode, I was skeptical: although hard to tell where the show was going, or what story would unfold, it seemed ominously tethered to familiar and (to me) exhausting themes: conjuring the alarming specters of kidnapping, abuse, trauma. But the show was, also, immediately, sort of strange, and I was intrigued enough to stay with it. As the first season unfolded, it became increasingly unusual and interesting. I’ll admit, however, that it’s Season Two that I truly enjoyed, and now when I recommend the show to others, that’s what I’m truly recommending.

In part it’s because the distressing captivity aspect largely fades away; in larger part it may be because the show shifts location to the Bay Area, which seems significant to how dramatically and imaginatively the story opens up. It is relatively uncommon to see the Bay Area explored and showcased onscreen—and The OA takes us not only around San Francisco in pleasing noir style, but also revels in the mystical beauty of West Marin, and dramatically amplifies the eerie quality of Treasure Island. I am always interested in looking at the role that place plays in shaping drama in literature, and Season Two offers (among other things) an interesting examination of that idea, with the intersecting themes of tech and mysticism and ethical questions.

But those are details, really. What made The OA special was its extraordinary imagination and ambition, and its infatuation with the power of story-telling itself. The questions it asks are sometimes intellectual, sometimes emotional—but always stripped of cynicism. Watching it offered relief from the fatigue not only of the news, but also from the numbing sense of the same stories being told in the same ways, following the same patterns. So of course this week I was disappointed to hear that Netflix will not make the additional seasons that the show’s creators planned. But I’m honestly more surprised it was ever made in the first place (that’s my own cynicism showing up). I do think that what they were able to produce stands on its own, and the open-ended quality of the de facto ending actually works in the context of the show’s kaleidoscopic infinity-gazing. I can’t wait to see what they create next. Though I know it will likely surprise me in new ways, I can’t help but hope it will also include parallel universes, giant squids, and layered references to “The Garden of Forking Paths.” In the meantime, I’m glad I have Season Two of Lodge 49 to look forward to on Monday. 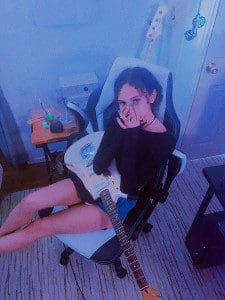 Zack Ravas, Editorial Assistant: Orion Lake’s Twitter bio reads, “in a bedroom with a soft voice…” and there’s perhaps no better description for the music that 22 year-old Christina Hernandez makes under the moniker. The New Jersey-based musician has already accumulated an EP and a series of singles on Bandcamp and music streaming services that feel entirely cohesive and of a piece: dreamy and forlorn, carried aloft by her ethereal vocals and innate gift for melody.

Orion Lake first appeared on my radar after she collaborated with L.A.’s MIRSY on the haunting “Big Eyes” (“Never made sense to me/Love is only memory/All I want is to fall asleep”). But I quickly took to Orion Lake’s back catalog, a series of tracks she’s been steadily releasing since Fall 2017, each one like a quiet capsule of the artist’s melancholy reflection in front of a rain-streaked window.

In an interview with UK music blog A Lonely Ghost Burning, Hernandez stated, “I’d say I’m more of a writer than anything,” and it’s a notion that bears out in her gently bruised lyrics and concise song structure (most tracks don’t run much longer than two minutes). This style is exemplified by the closing track on her first EP, the acoustic duet “The Future is Not That Scary”: “Who were you/when you walked right in/to my head, to my heart/You left it open/It’s kerosene/left in a time machine/Kissed you once/Now I want it forever.”

Hernandez cites The Cure and Bjork among her musical influences, and describes her songwriting process thus: “Most of the time it’s me in my room, and I’m usually alone. I like to make it atmospheric with the lighting, and I just make sounds and start writing.” That DIY quality—the sound of just an artist and her laptop or guitar—is there in the closely mic’d intimacy of Orion Lake’s voice, and the quiet backing of synthesizers and acoustic guitars. It’s the kind of dark bedroom pop that should resonate with anyone who can relate to the feelings of depression and anxiety Orion Lake poetically conveys (“I cry hard on the drive home/I only laugh when I’m alone”), and marks Hernandez as an artist to watch closely in the coming years.