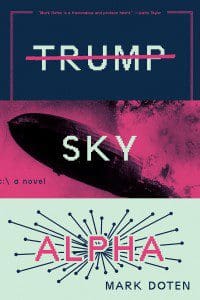 For many Americans, the phrase “The Man with His Finger on the Button” has never registered as so ominous and disturbing as with a President as ill-tempered and braggadocios as Donald Trump in the White House. As Mark Doten’s latest novel, Trump Sky Alpha (288 pages; Graywolf Press), opens, those fears are realized when a crippling cyber-attack on America’s infrastructure prompts President Trump to unleash the country’s nuclear arsenal upon its perceived enemies. “The loss of life, it’s always tragic,” Trump intones from his massive zeppelin-like fortress, the titular Trump Sky Alpha. “But it’s been incredible. The results that we’ve had with respect to loss of life. We have little Rocket Man and the crazy disrespect and Iran and China and it’s all been contained beautifully.”

Doten then jumps a year later, after roughly 90 percent of the world’s population is eradicated in the ensuing nuclear warfare on January 28, with the survivors residing in heavily monitored, sterile government shelters. Our protagonist, Rachel, is a journalist and widow given her first assignment as a writer for the fledgling New York Times (now based in Modesto): a piece examining Internet humor before the end of the world. Rachel makes the case that there are other, more important stories to be telling––for instance, just who launched the cyber-attack that precipitated the events of 1/28, and how many civilians are still alive out there in the apocalyptic wasteland––but her editor assures her this story, about the memes and jokes that comprised Internet culture shortly before Trump launched the nukes, is the only story their government handlers are comfortable with her writing at the moment.

Just as the remnants of civilization have survived, albeit in a controlled environment, so, too, has the World Wide Web; in order to write her story, Rachel is permitted access to the last cache of the Internet before 1/28. Rachel’s investigation sends her tumbling down the rabbit hole of web humor in the early 21st century, from Pepe the Frog to the Distracted Boyfriend meme. Her study throws in sharp relief the difference between the way the tech giants of Silicon Valley envisioned their social media landscape—


…the men who saw the internet as a new utopian space that would dissolve the old industrial giants, the obsolete monsters, those countries and corporates of unfreedom, and usher in new forms of being, or restore the old ways we’d lost…

—and how quickly that naïve vision was perverted by users who resorted to the kind of virulent trolling, misogyny, and racism that can be found in almost any corner of the Internet:

The sense that it was this, it was the structure of the internet, that had amplified the stupid and the evil, and at the same time flattened them, made them impossible to distinguish. Or made distinguishing them somehow beside the point.

Trump Sky Alpha draws a direct line from the poisoned well of Internet culture during the Aughts to the rise of Trump as both cultural icon and President––our Troll-in-Chief––as if to say one would not be possible without the other. “From Watergate to Gamergate, from Pizzagate to Trump. A line, perhaps, or lines,” Rachel writes.

Despite her article’s seemingly frivolous subject matter, Rachel’s stake in it proves personal: if she turns in a satisfactory draft, the government has promised to take her to Prospect Park, the site of the mass grave most likely to contain her wife and daughter. The story ultimately leads Rachel on a strange journey to uncover the identity of the mysterious hacker, known only as Birdcrash, who may have launched the cyber-attack just before 1/28, as well as their ties to a Filipino-immigrant writer named Sebastian de Rosales and his obscure novel The Subversive. By the time Rachel comes face to face with Birdcrash, the pop culture-obsessed computer genius references everything from The Legend of Zelda to Moonraker, all while holding Rachel hostage with a power drill:

Did you see The Matrix. The real truth––the reason Neo can stop the squids in the real world, otherwise barely acknowledged––is that there is no outside the system in The Matrix, they’re all in there all the time, it’s bedtime stories or lullabies, this dream of resistance. The metalevel, the outside of the real matrix, in that, their head jackets aren’t removable…But here we can. We can do something about it here. We are drilling in your head.

Though Birdcrash’s ramblings are clearly the product of a disturbed mind, his rumination on the impossibility of true “resistance” echoes another of the book’s arguments: that in the end, as our country lies in smoldering ruins, armchair activists and impassioned tweets will have done little to stem the ride toward ruin. “There’s no magic hashtag resistance position right now for journalists,” Rachel states. “There’s no democracy dies in darkness or the fucking news fit to print. Just accomplices to whatever this is.” Though Rachel makes this declaration from the other side of a nuclear Armageddon, it’s easy to make the case she speaks for us in the moment, echoing the helplessness many Americans feel each day when they turn on the news.

Unlike the would-be “disruptors” of the tech world, Trump Sky Alpha proves genuinely disruptive literature, taking readers on an often violent and unsettling ride, told in a form that feels as fluid and ever-shifting as Internet culture itself. Doten draws ample influence from his science-fiction forbearers, particularly cyberpunk icons such as William Gibson and Neal Stephenson, but by setting his novel only a year or two from our present time, Doten removes the sometimes-reassuring barrier of genre and presents us with a novel that is uncomfortably and hideously now.