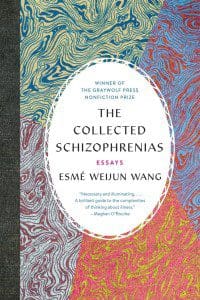 Esmé Weijun Wang’s The Collected Schizophrenias (202 pages; Graywolf Press) consists of twelve essays addressing the technical definitions, medical prognosis, and personal challenges of schizophrenia. In the first essay, Wang discloses her own diagnosis to the reader: during her time as an undergraduate at Yale, she was diagnosed with schizoaffective disorder (bipolar type), which she describes as an illness that combines certain behavioral markers of schizophrenia and bipolar disorder. She makes it clear the schizophrenias (of which there are a few types) are both complex and vast in how they are perceived and experienced. Wang manages to discuss such a broad topic by anchoring each essay with a specific cultural or personal touchpoint: for example, her concerns about whether or not she would be a good mother, and the case of Malcolm Tate, a mentally ill man who was murdered by his family members. In another essay, she discusses the movie Lucy and her experience with delusions induced specifically by films that take place in other realities. One delusion she often experiences is that of the people in her life having been replaced by doubles or robots. Another is Cotard’s delusion:

I write this while experiencing a strain of psychosis known as Cotard’s delusion, in which the patient believes that they are dead. What the writer’s confused state means is not beside the point, because it is the point. I am in here, somewhere: cogito ergo sum.

Wang’s vulnerability as she puts her diagnosis and lived experiences in conversation with each other welcomes us into her life while also provoking our own self-reflection. Her Ivy League education and status as a published author are frequently identified as ways she finds validation among neurotypical people. In the essay “Yale Will Not Save You,” she writes, “‘I went to Yale’ is shorthand for I have schizoaffective disorder, but I’m not worthless.”


Neurotypical readers may ask themselves, would we see Wang as credible if not for her ability to articulate her delusions and episodes? Would we trust a schizophrenic person’s recollections if that person was not college-educated or successful in their career? Her in-depth discussion of medical, educational, and judicial institutions ask us to question the humanity and compassion we extend to those who struggle with their mental health. Without speaking on anyone else’s behalf, Wang touches on involuntary hospitalization policies, the potential overlap of schizophrenia with other disorders like PTSD or manic depression, and more:

Wang gives readers a map of sorts into rarely-charted waters. She handles the discussion of schizophrenia with a gentleness for both the subject matter and the reader. The collection strikes a balance between the technical and the emotional, and works, like good books do, to change how we think.