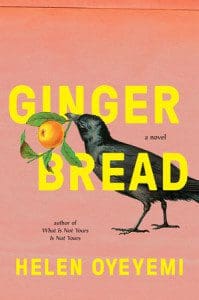 Helen Oyeyemi’s latest novel Gingerbread (258 pages; Riverhead), revolves around the fictional country of Druhástrana, an “alleged nation state of indeterminable geographic location” that may or may not exist, depending on who you ask. Druhá Strana roughly translates from Slovak to “the other side” or “the flipside,” a fitting name for a nation that bears more resemblance to a half-remembered fever dream than any currently existing country.

Gingerbread mirrors the ever-shifting nature of Druhástrana in many ways, with its circular and occasionally conflicting narratives leaving the reader frantically performing mental gymnastics in order to keep up.

The novel focuses on a family of Druhástranian expatriates who bake obscene quantities of gingerbread daily: Margot Lee, a doting grandmother and preternaturally talented interior designer; her daughter Harriet, who is consumed by her quest to find her childhood best friend, distant cousin, and alleged fairy-changeling Gretel Kercheval; and Harriet’s teenage daughter Perdita, who cannot indulge in her family’s signature pastry because she was born with celiac disease.


Created by a distant ancestor on Harriet’s father’s side as a way to eke any remaining nutritional value out of spoiled rye, the gingerbread is revered by some and intolerable to others.  It plays many roles throughout the book: as the only known method of transportation to or from Druhástrana, as the building material for an impossible-to-locate house where an improbable reunion is destined to occur, and as a way for Harriet to win over the cliquish Parental Power Association (PPA) at Perdita’s school.

The Lee women refuse to sell their gingerbread, instead using it as a way to extort “information, goodwill, and … compliance.”  In doing so, Oyeyemi has transformed a traditional symbol of domestic femininity into a potent tool and weapon that all three Lee women yield indiscriminately. The majority of the book is comprised of Harriet relating her childhood and adolescence in Druhástrana to Perdita after Perdita attempts suicide by way of gingerbread in an extremely desperate effort to travel to her family’s homeland.

As Harriet describes her life in Druhástrana, it becomes clear she possesses “the kind of past that makes the present dubious.”  She reveals to Perdita that she grew up on an impoverished, isolated farm in the Druhástranian countryside, reading the collected works of Émile Zola and baking gingerbread. After a series of improbable events, the Lee family gingerbread attracts the attention of Gretel’s mother, who then recruits Harriet to work at a gingerbread theme park run exclusively by other farm girls.

Harriet’s history starts to spiral from there, and is frequently interrupted by asides from Perdita’s life-size (and apparently self-aware) dolls.  These sorts of fantastical moments are common, with the narrator explaining that “talking or thinking about ‘there’ lends ‘here’ a hallucinatory quality that [Harriet] could frankly do without.”  This tendency toward the surreal is heightened whenever the characters squint too hard at what it means to be Druhástranian in the outside world.

Harriet obsessively searches the Internet for traces of Druhástrana, perhaps in an effort to confirm that her own lived experience did in fact occur. The majority of the articles she finds are translated by Drahomira Maszkeradi, a woman who later becomes the Lee’s realtor as Harriet searches for one of the three houses where she promised to meet her cousin Gretel once she had left Druhástrana and grown up.  It’s unclear whether Harriet ever makes the connection that the woman who is trying to help her fulfill her doomed quest is the same woman who has provided all of her knowledge of Druhástrana since leaving. As Maszkeradi skirts the Lee women’s attempts to pin down her origins, Oyeyemi hints at the answer to a larger question: what does it mean to live in a world that denies your very existence?

Margot had only one question left. In Druhástranian, she asked: “Drahomíra, my dear…are you by any chance Druhástranian?”
She was answered in English, and Harriet held her phone away from her ear to protect it from the Maszkeradi trill: “Of course I am…I mean, aren’t we all?”