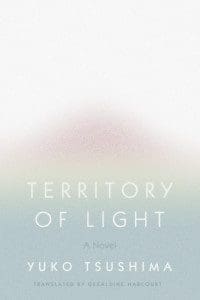 Yuko Tsushima’s Territory of Light (183 pages, FSG; translated by Geraldine Harcourt) begins when the husband of the narrator, Mrs. Fujino, leaves her. After months of apartment hunting, she moves with her two year-old daughter into a new building. The apartment is abundant with light most hours of the day, but it fails to illuminate their lives the way she hoped it would.

The novel consists of twelve brief chapters, each one a vignette of life in Tokyo with an inquisitive and sometimes unruly daughter. (The narrative was originally published in Japan in twelve installments, between 1978 and 1979.) At first, Mrs. Fujino finds empowerment as a newly-single woman living in the city, but the thrill of independence quickly fades, and her obligations wear her thin. Her daughter is causing trouble at daycare, and in the middle of the night has crying fits that often end with soiled sheets and start up again just hours later. Over the course of the story, Mrs. Fujino becomes disorganized, sleeping in well past 10 a.m. and sometimes staying out too late at the bar or in finding companionship with old acquaintances. The mother-daughter duo’s schedule becomes erratic, and their relationship seems to shift with the added stress. Fittingly, as a reader, it is sometimes hard to maintain a sense of direction; it’s this simultaneously muted and overwhelming feeling of instability that comes through in Tsushima’s book.


Through it all, Mrs. Fujino remains an insightful and placid narrator. Though her daughter and soon-to-be ex-husband unhinge her, her thoughts are clear and her internal monologue displays an acute self-awareness:

Impatient at her slow pace as we headed for daycare, I picked her up and ran. As I did so, the thought that, in spite of everything, maybe some part of me wished my daughter dead crossed my mind. Why would I have dreamed of her dead body otherwise?…When we reached the centre, she tripped away to join the other children without a backward glance. The moment when she separated herself from me was a palpable relief.

While she realizes much of the instability around her is of her own making, she never loses sight of her humanity—and the humanity of her young daughter, whose father left the picture rather suddenly:

A couple of nights after I’d dreamed of her death, as she cried and cried, the same as ever, I laid her on my lap like a baby and began to recite ‘magic words’ while rubbing her chest and stomach, tracing circles … My daughter had stopped crying and was listening to my voice, a smile on her lips. Encouraged by that smile, I continued, still more fervently, to recite the magic words.

Tsushima’s Territory of Light, for which she won the inaugural Noma Literary Prize, is a tender and relatable story, highlighting both the obstacles and highlights of a transitional stage in life. By the novel’s end, readers are left with the sense this mother and daughter will continue to learn and change together as they remake their life.