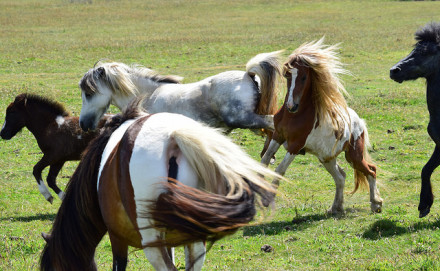 Emma Copley Eisenberg’s work has appeared in Granta, Virginia Quarterly Review, American Short Fiction, and other publications. Her first book, The Third Rainbow Girl, will be published by Hachette Books in 2020. Her short story “Mama” appears in ZYZZYVA No. 113. You can read an excerpt from the beginning of the story below:

My daughter’s new girlfriend is big. Big mouth, big breast, a tuft of hair so curly it looks permed. My daughter Beth has one girlfriend already, the pint-sized Tomboy who drops by every Easter and Christmas.

Mark my words, says Donna from black-belt class, looking over my shoulder at the picture on my phone as we change into our uniforms. This will end in clusterfuck. No one can have their cake and eat it, too.

There’s no cake eating, I say, they know all about each other, and everyone knows what they’ve signed up for. Very modern. Not so different from when you were going out with that postal worker while driving loops around the Baltimore harbor late at night with a student of philosophy, hmm?

On the mats, I’m paired with a ponytailed man who goes down easy with a swift kick to the rump. He looks at the ceiling. I look at him. For I also have questions. I am only human. Two girlfriends! What does one alone person do with so much love?

Beth calls while I am prepping dinner to say they will leave the city after work then drive east to us through Friday night traffic.

Can we go to Chincoteague? she says, the sounds of her hospital bleeding through the Baltimore end of the line. Cara really wants to see ponies, she says, and I need to make it up to her.


Despite having money now, Beth still lives in crappy rentals with roommates and without blinds and moves every year. She likes to create harsh conditions so she can be proud of having overcome them.

The dogs stand on the couch, white, fluffy twins, watching out the window for Beth’s boxy sedan.

A watched pot never boils, I tell them.

That’s not real, Mike says, ever the lawyer. It’s just a thing to say.

I reach for my practice sword on the kitchen island where I left it, wave it between Mike’s face and the television where men are sporting against a green background.

Cara beats Beth to the mudroom door and comes in first. She gives me a bear hug then rests her wide jeaned butt atop the washing machine. She wears a button-down shirt that looks too soft and rounded to be for business. If I didn’t know better, I would think: pajamas. Earrings that hang down but don’t match. I like her already.

Beth appears, loaded down with gear. Beth looks like an eight-year-old boy in a blazer, but more underslept. She rubs her eyes with the tips of her fingers. Her hair has gone gray above both ears, which gives her a distinguished look. She’s thirty and a doctor of lungs now. When she moves to hug me, the ring of keys on her pants make a clanking sound against the travel mug on her backpack. She hugs me a long time.

I’m parched! cries Cara, shooting Beth a look. I get it, the AC in Beth’s car is broken, has been broken. The Tomboy and I have long since given up nagging Beth to get it fixed. But in the context of this new girlfriend, everything seems possible again.

Oh for God’s sake, I say to Beth, I’m calling my guy, he can take care of it tomorrow.

And to my great surprise Beth just flops her shoulders. Okay, she says.

They have eaten sweet potato burritos already from Tupperware in the car, but they want to drink. Beth, Cara, and I sit at the round kitchen table drinking small amounts of whiskey from large plastic glasses. Mike sits in the living room with his back to us. The brown recliner’s springs crack every time he reaches for the can in the carpet.

I’ve always wanted to come to the Eastern Shore, Cara says to me. Ever since I was a little kid and I read that book about Misty, this pony who roams Chincoteague. She was wild and free and ate sea plants and took no shit. She could kill any of the other ponies no problem.

That’s like my Mama, Beth says, tipping her plastic cup in my direction.

Oh yeah? Cara takes her own face in her hands, elbows on the table, and wiggles her weight side to side in the wood chair, making it creak, like a soft bird in a nest, brooding. She is soft at the tops of her arms and in the middle where her shirt is tighter, where Beth and the Tomboy and I are hard. Her shirt is definitely a pajama top.

Yeah, Beth says. Mama’s a black belt now, can take down anyone in her class, even the men. If I were a strange man, I would certainly think twice about messing with her.

I have always wanted to fight, Cara says. I have always had the fight inside me but never has the outside world provided an opportunity for its expression.

Don’t listen to her, I say, she’s a bad example.

I used to get into fights, says Beth.

My guy friends in high school, Beth explains. We used to say that to each other. Then in college, I walked around campus at night just saying it, until someone did.

And then she’d call me and cry, I say.

Read “Mama” in its entirety by purchasing a copy of ZYZZYVA No. 113 today.