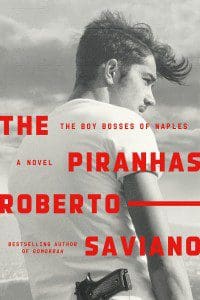 In Roberto Saviano’s latest book, The Piranhas: The Boy Bosses of Naples (368 pages; FSG; translated by Antony Shugaar), the author of Gommorah, which detailed the grip of the Commora over Naples, examines through fiction the young gangs—the “paranza”—of that city, focusing on one such group of teen boys and particularly on Nicolas Fiorillo, one of its members.

The novel immediately establishes its world of violence and irrational behavior with a disturbing scene of bullying after a boy makes the mistake of “liking” Nicolas’s girlfriend’s photos on social media. From there, things only get worse as Nicolas and his gang increasingly find that the world of organized crime is an ideal means for them to achieve their goals of making money and wielding power. They soon become involved with drugs and guns, and witness—as well as partake in—numerous murders.


One of the most striking elements of the story is the indifference the majority of the gang exhibits as they plunge deeper into dangerous situations. They may be youthful, nervous, and inexperienced, but these teens’s perseverance (and motivation) prevails over all else. As mentioned by Saviano in an interview with his U.S. publisher, the boys’ attitude, unfortunately, speaks to reality.

Saviano worked closely with the book’s English translators on how to get across many of the Neapolitan words and phrases used in The Piranhas. Some terminology was left deliberately untranslated to preserve the language and the raw nature of Saviano’s style, such as in this robbery scene:

“Muóvete, miett’ ‘e sorde, miett’ ‘e sorde,” Nicolas said roughly in dialect, telling him to hurry up and put the money in the plastic bag that he tossed to him. He’d stolen it from his mother after, emptying out the doctor’s prescriptions she kept in it.

The implementation of the original Italian, especially in the scenes of violence, serves the story’s atmosphere, preserving as it does the Neapolitan culture in which the novel is set. (At times, though, the lines can read stilted.)

The Piranhas makes a vivid impression. Saviano creates a clear picture of children being led into the hands of violence and terror, leaving us with dread for the youth of Naples who can’t resist the temptations offered by organized crime.