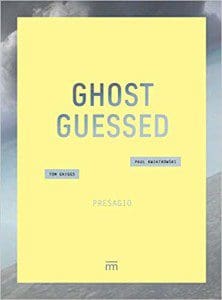 Ghost Guessed (156 pages; Mesæstándar) is an exquisite meditation on grief, loss, and family ties in a world increasingly given over to technology. A combination of prose and photography, the work takes a unique approach to creative nonfiction by telling a highly personal story through the blended voice of co-authors Paul Kwiatkowski and Tom Griggs. The book opens in the spring of 2014 as our unnamed narrator finds himself traveling to Malaysia with his wife just three weeks after Malaysian Airlines Flight 370 vanished over the South China Sea. The plane’s mysterious disappearance triggers the narrator’s memories of his cousin, Andrew Lindberg, who similarly vanished in 2009 while flying a single-engine plane near the town of Staples, Minnesota. It’s worth noting that Lindberg is Tom Griggs’ real life cousin, and Ghost Guest features a host of what appears to be authentic family photographs. The ambiguity as to which author can be attributed for the story lends to the spectral quality of the work and blurs the line between truth and non-truth. “The boundaries of reality became fluid,” the narrator states, “and while we knew they would reset, we didn’t know what form they would take.”

These twin disappearances create dual timelines in the book––one in which the narrator recalls his malaise following the financial crash of 2008-09 and the discovery of his cousin’s downed plane in the White Earth Indian Reservation, and the other chronicling his trip to Malaysia as he becomes increasingly unmoored by memories of the past. Threading these moments together is the omnipresence of technology in our lives, as well as the far-reaching absence the death of a loved one can create. “Today it is no longer a question of whether there are images of an event,” the narrator muses, “but a question of what to show from all we have and how to show it to the largest possible audience.”


When we can spend all day scrolling through “an aggregation of social media posts and crime-scene pics, ISIS propaganda and high-end real estate listings, surveillance stills and police bodycam footage,” one might expect we’d find it easier to parse truth from the world around us. Instead, we find “mountain digital archives that hem us in,” and we are left to ponder the same questions the writer does when he reluctantly takes a job photographing foreclosed houses in the Midwest during the financial crisis: “How do you make meaningful work amidst endless images? How do you make shapes from the sea?”

In Ghost Guessed, the ominousness of the Information Age––with its “Predator drones making civilians fear clear blue skies, and the shifting satellite and radar grids recording our lives as they unfolded,” as well as what seems to be the increased occurrence of aviation accidents during the last decade––is set in contrast with the bonds of family. Home photographs from before and after Andrew Lindberg’s death capture stray moments of intimacy among kin, as well as the visible sense of loss seen upon the faces of bereaved relatives. The book’s sparse prose underscores this state with its quiet, humane details, as when the narrator reflects on a mundane occurrence during the search for Andrew’s downed plane: “I remember pulling a sandwich from a cooler and immediately feeling the banality of the moment, the lack of reverence of everyday events amid catastrophe.”

Most of the photographs in Ghost Guessed possess the texture of analog media, a clear reminder of how previous generations used to document their lives on film, compared to the increasing digitization of this era, our memories now reduced to Facebook feeds, Instagram photos, and the ambiguity of “The Cloud.” The narrator observes, “A triangle emerged: camera, society, and sky bound in a system of infinite visible relationships, increasing the probability of finding a pattern we could grasp.” But what happens when no such pattern emerges? Ghost Guessed is frank about the harsh truths of middle age, of finding yourself no more grounded or certain than when you were young. “…I wondered if I’d ever live up to my own expectations,” the narrator reflects, “I could start over and still never get past the beginning.”

It’s fitting then that Ghost Guessed ends exactly as it starts: in uncertainty as murky and grey as the roiling clouds that adorn its back cover. In tracing the lingering hold of technology on us, from disasters in the skies to social media feeds, and the devastating losses that can impact a family for years, Paul Kwiatkowski and Tom Griggs have crafted the rare multimedia work that one can declare profound.