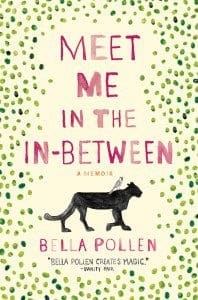 So often, the problem with words is their yielding to the things in our lives that don’t make sense or don’t want to make sense. In her new book, Meet Me in the In-Between (320 pages; Grove Press), Bella Pollen takes on the daunting task of containing her life in words even as she acknowledges that the self cannot be contained. Author of five novels, including the critically acclaimed The Summer of the Bear and Midnight Cactus, as well as a contributor to Vogue, Bazaar and the Times (UK), Pollen ventures into the realm of memoir with an account of her life as a Transatlantic writer and mother.

Pointedly astute, she carefully deploys every word so they serve as tiny twigs to build the nest of her story. Beginning with tales of her youth in New York City, including her vengeful harassment of a rental car clerk and her courtship with the manically violent son of a Mafia leader, the memoir follows Pollen’s whims both indelicate and tender. Ultimately stuck between her desperation to belong to someone and somewhere, and an obsessive yearning to escape from the banality of an ordinary life, Pollen finds herself haunted by the disparate junctures of the self.


This haunting becomes literal when, in what seems a fictive touch, Pollen is visited at night by a sexually dominating incubus who forces her to return to her past. With this hint of the surreal, Pollen recounts her life in a way that both mocks the gravity of events and magnifies her sincere quest for self-discovery. This divergence from the traditional form of a story becomes even more interesting when we learn about her obsession with other people’s stories, which itself mirrors readers’ attraction toward memoir.

Pollen’s need to fabricate narratives for other people—whether it’s the Tijuana parking lot attendant called “El Ganso” or the Hollywood agent she contacts to sell the story of her travels to Mexico—and her awareness of that need ultimately reveal how the search for meaning in our own lives can lead us to construct it for others. It’s as though Pollen finds that inventing stories for those around her allows a brief respite from the claustrophobia of constant introspection. But as Pollen discovers, this habit of projecting meaning onto others often causes one to neglect the work required to find her inner peace.

As the memoir whips us from place to place and time period to time period, Meet Me in the In-Between displays the disjointedness of a life, how whims and flings don’t make existence—or a woman—any less meaningful. It’s in the spaces among all these things that something magical breathes and resists capture. As Pollen illustrates in her sharp, nearly wry voice, it is not our memories that will lead us to an understanding of the self, but the act of maneuvering among them, as though they are a crowd blocking the self from view.