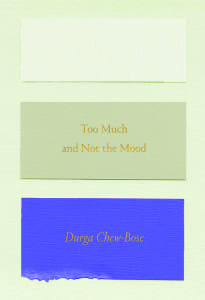 Too Much and Not the Mood is Durga Chew-Bose’s first essay collection, though Chew-Bose’s writing has been getting published for many years now. Known for her BuzzFeed Reader essay “How I Learned to Stop Erasing Myself,” Chew-Bose’s name has appeared in the same circles as other feminist hipster writers based in New York like Lena Dunham, Tavi Gevinson, and Jazmine Hughes. She is also one of the founders of Writers of Color, a collective of feel-good-yet-aestheticized-sadness progressive writers out on the East Coast.

Melancholy, nostalgia, wistfulness, wishful thinking, or the lethargy of a warm summer afternoon are constants in Too Much and Not the Mood, although essays in the latter half of the book explore boredom, self-possession, embarrassment, and other emotions that characterize adolescence. Indisputably, the collection’s biggest strength is the richness of its prose. Chew-Bose’s is especially talented in preserving moments of beauty. She’s incredibly attuned to detail, and catches a person’s verbal or physical tics in such a way that they seem authentic. Take, for example, these scenes from the 93-page-long “Heart Museum,” a sprawling, meandering kaleidoscope of an essay that opens the collection:

“Writing will never be as satisfying as observing someone whom I knew was terrible get caught in a lie; as satisfying as the pop! I anticipate when twisting open a Martinelli’s apple juice or when I pour hot coffee over ice come summer or lace up skates in the winter—the firm tug of hooking the top part of the boot. Writing is a closed pistachio shell.”

It’s compelling writing. Objects and experiences are made tangible and thus poignant, and one shares Chew-Bose’s sense of wonder at the small things around her, of how much she loves and craves a given experience. It’s nice, but after reading pages of it over and over, the topics and ideas become increasingly predictable. That’s what happens in the last third of “Heart Museum,” and continues through the collection’s remaining thirteen essays. I’m not sure this kind of self-reflective-yet-self-possessed writing serves Chew-Bose’s journey of self-discovery; it doesn’t provide commentary, analysis, or anything. Essays such as “Since Living Alone” (which draws an apt comparison to Virginia Woolf, and will definitely be written about in comparison with A Room of One’s Own in an undergraduate literature class someday) underscore this tendency as well, where “self-discovery” is entirely preoccupied with the self—a self we, the reader, don’t entirely understand. By the time we’re done with Too Much and Not the Mood we are not even sure what the “too much” is that Chew-Bose writes around (and never confronts directly), ultimately making the writing irritating.

Chew-Bose’s voice lends itself to vignettes over stories, so sprawling epics like “Heart Museum” or “Part of a Greater Pattern” get lost in moments of beautiful observation. This isn’t necessarily bad, because it can make reading each essay a pleasant experience. However, every single piece is like this: unfocused, meandering, a kind of dérive of Chew-Bose’s mind. The author even calls attention to this potential problem in “Heart Museum” (which is so representative of the work here it can successfully stand in for the rest of the essays):

“This piece, for example, is largely composed of interceptions. Starting somewhere, ending elsewhere. Testing the obnoxious reach of my tangents. Likely failing. While I rely, perhaps in excess, on my wad of massed-together nostalgia and unrelated brain waves, my hope is that there is in fact a frame. That conjunctions are accomplice. That awareness isn’t merely a stopgap; that it develops beyond a tally.”

“Likely failing” is a gentle way of admitting that focus—that editing—could have pushed the essay and therefore the book in a more coherent direction. But if she expects the reader to forgive her work for being meandering and unstructured just because this tendency is acknowledged in a self-deprecating and apologetic manner, she may be asking too much. Ultimately, Too Much and Not the Mood is successful in making the reader feel wistful melancholy (or in the essay “Miserable,” feelings of misery), but doesn’t do much else.