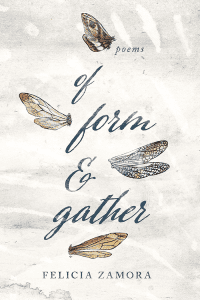 In the introduction to Felicia Zamora’s collection of new and selected poems, Of Form & Gather (62 pages; University of Notre Dame Press), Edwin Torres writes that “A poem’s burden is to live inside its creation, where the organized singularity of its gathering is what brings the reader to the reader’s own voice.” This is an accurate description of how Zamora’s poems work, and what they do to the reader. The book is divided into four sections, titled “circles & circulations,” “that that that; this this this,” “in in; gather gather,” and “To be out of- dually other.” Each section does exactly what the title of the book says, as they each play with form and formalistic elements while underlining the circular and repetitive nature of Zamora’s poetry and images.

The first thing that stands out about Zamora’s poetry is the many ways she uses punctuation to create or disrupt a rhythm in her words. Emdashes, ampersands, ellipses, and semicolons abound. The “&” gathers and binds things together, doing the kind of magic Zamora alludes to in all of her poems. The ampersand stands out especially in light of the collection’s title, as well as in two other titles here: “& in wonder too” and the closing poem, “& wings made of matchsticks.” However, it is in “Peel-back,” a poem that teases out the relationships among land, exposure, vulnerability, and injury, that Zamora uses the ampersand most effectively, bringing together things that would otherwise be opposites, or at least disparate concepts. Zamora writes of “this just out of & reach is a noun no longer in roll off your tongue” and “& you feel so orange in the peel-back,” as if the ampersand is denoting the following statement as an addendum to the rest of the poem. Even more effective are the ways Zamora connects the body and injury through the ampersand:


rinds of elbows, of knee caps: & wounds & their wide-wide-open,
if able, any locked door… & arches and more knobs

This list of elements of a body, or injuries from an as-yet-unidentified assailant, seems to be more personal than anything else. But when compared to the next few lines, this cataloguing of linked wounds and body parts suddenly proposes a sobering question: “when you compact it all down; a mountain; who counts in landscapes?” Much of Zamora’s poetry also plays with the border between the natural world and the human body. For Zamora, this border is nearly indistinguishable. Our bodies are organisms are cells are animals. However, these images and metaphors thankfully never fall into overwrought “we are all connected” hippy-dippy nonsense. There is a sense of a cosmic connection among all things, but Zamora grounds this connection in lush, sensual, and sometimes eerie depictions of flesh, bone, and blood. This is how she avoids clichés about everything being fundamentally “connected” by mere virtue of co-existing in this world.

Throughout Of Form & Gather, Zamora uses animal and ocean imagery to destroy any borders or divisions between human forms, humanity, and the natural world. She does this most specifically in “Decoy,” where the image of a giant tube worm and “the fish with heavy wet with the glowing lure on its head.” In an interview about the poem, Zamora describes how she addresses the question “How can we consider the self without considering our relationships to others?” by changing the speaker of the poem with every line. At first, it is the odd and alien ecosystem at the bottom of the ocean. Next, it is an eel, then an anglerfish, then an ocean vent. Then, Zamora uses images, such as hemoglobin and amniotic sacs, that are by no means only associated with humans. The poem slips and changes subjectivities to show how all living things are connected: “When I say you I mean I; a little I.” “We are deep, ocean deep,” Zamora has said of the poem, “and we are always more, much more, than the self we portray to the outside world.”

“Decoy” and many other poems in the book remind me of Donna Haraway’s essay in e-flux journal pushing back against the concept of the Anthropocene. The idea behind the Anthropocene is that humans (hence the anthro- prefix) have affected the Earth so drastically that the planet has entered a new geological era. Instead, she proposes that because of “tentacular thinking” we’re now living in the Cthulucene. “The tentacular are also nets and networks, it critters, in and out of clouds,” Haraway writes. “Tentacularity is about life lived along lines — and such a wealth of lines — not at points, not in spheres.” The connections between tentacular thinking and Zamora’s poetry are intriguing. Zamora also draws (and then erases, tangles, and networks) lines among all organisms throughout Of Form & Gather. Perhaps Zamora’s work can be considered poetry for the Cthulucene.