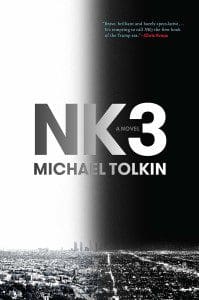 Michael Tolkin’s 1988 novel, The Player, remains a note-perfect send-up of late Eighties Hollywood excess, a paranoid neo-noir told from the point-of-view of the murderer himself—a creatively and morally bankrupt Hollywood executive. Now the acclaimed author, screenwriter, and director returns with NK3 (300 pages; Grove), his first novel in more than a decade. Tolkin has long specialized in satire so shrewd and well-observed that it barely registers as satire; NK3, in which a memory-erasing biological weapon creates a power vacuum for the working classes to seize control from the rich and elite, couldn’t have arrived at a more apropos time.

Initially, the biggest shock of NK3 is how much it reads like a post-modern take on the airport bestseller. The opening chapters leap from place to place and character to character with each flip of the page like the Michael Crichton thrillers of yore. These early passages are burdened by exposition as Tolkin works to establish his near-future world of 2020, a society that—like the best speculative fiction—looks radically different and yet eerily similar to our own.


Here, Tolkin is at his sharpest when the describing the elation that initially befell those affected by NK3, the nano-bacteria engineered by the North Korean military to wipe out humanity’s collective memory: teenage Erin is overwhelmed in the hallway of her high school as “galaxies of old resentments rolled out of her—memories of insults and bad grades and rejection and envy—like a movie reel unspooling into a fire, and in the empty space left by all that crap, she fell into an infinity of peace.”

Once Tolkin lays the groundwork, NK3 takes life as the uninhibited allegory it wants to be, a novel in the tradition of other near-future parables such as Margaret Atwood’s The Handmaid’s Tale. Tolkin charts the fate of various opposing factions vying for dominance in post-apocalyptic Los Angeles. The former chief of police, now known simply as Chief, lords over a cluster of Hollywood mansions surrounded by the Fence—a wall “a thousand miles around, ten thousand feet high” and made of “steel plates, cinder block, and reinforced concrete,” a wall that should sound eerily familiar to anyone who’s heard a speech from our current Commander-in-Chief.

The reality that NK3 has left Americans with only “the alienated echo” of who they once were means the stage is set for the Chief and his Mythology Committee to invent a narrative, a set of “alternative facts,” if you will, by which to control a fearful populace. The denizens of Chief’s community are kept docile through sex and an ample supply of scavenged goods; safe and sated, they possess little need to question their overseer’s brutal tactics. When one character is asked, “Do you understand how fucked up everything is in the world?” her response is simple: “It’s the only world I’ve ever known.”

It’s the privilege of science-fiction authors to comment on the anxieties in our national headlines, and Tolkin does so expertly here, while also evoking how genuinely terrifying it would be to wake up in a world where doctors, mechanics, and airplane pilots have lost their abilities overnight, causing the gears of a society whose ceaseless operation we take for granted to suddenly halt. In one scene, the Chief’s head-of-security remarks, “In a world without memory, it’s easy to forget things even while they’re happening. Not just easy, convenient.” It’s a statement that speaks to our current 24-hour news cycle, and a presidential administration that generates more outrage than a person can feasibly process in a day, as much as it does to the ruined husk of Tolkin’s future Los Angeles.

As in The Player, Tolkin’s fascination with the world of celebrity is never far behind, and the novel builds to a climax as a Lady Gaga-esque pop star named Shannon Squier makes her way to the Chief’s encampment. Squier’s siren song triggers a flood of half-retrieved memories for anyone within listening range, only that their previous lives are intermingled with the endless stream of pop culture we ingest: “They didn’t know the difference between their dead or drifting parents or baskets of puppies on YouTube.” It’s as though more and more we are less the sum of our human experiences and rather the totality of the media we consume, a point driven home by several characters who, having lost their prior identity, name themselves after the musicians still on their iPhones.

Ultimately, NK3 is precisely what Tolkin himself describes in the Acknowledgements section: a portrait of “a city in distress.” As the Fence threatens to collapse against the weight of the unprivileged masses pounding against its walls, and the Chief and his security team face the reality of a dwindling food supply, there is little hope of redemption or repair. Even when a crew at LAX finally launches a plane off the runaway in search of a more intact civilization, Tolkin leaves their fate shrouded in uncertainty. Much like being left in the wake of one of the massive fires the Chief triggers to make the area around the Fence uninhabitable, NK3 is a novel about taking stock of a scorched earth. Tolkin tasks us with facing a post-truth era head-on and admitting, in the Chief’s own words, “This is what it means to be human now,” and leaves us wondering, so what’s next?