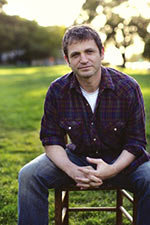 Peter Orner’s Am I Alone Here? Notes on Living to Read and Reading to Live (316 pages, Catapult)—which concerns Orner’s favorite stories, the lives of their authors as well as Orner’s own—has a modest subtitle. It suggests the essays in the collection, which was recently named a finalist for a National Book Critics Circle Award, are rough, unfinished. (One of the essays in the collection, “Since the Beginning of Time,” appeared in ZYZZYVA No. 107.) Because Orner maintains this Midwestern-like self-deprecating tone throughout the book, his intellectual rigor might catch you off guard. He takes stories—telling them, reading them—very seriously. With the same combination of self-effacement and scrupulousness, Orner discussed with us via email how to inhabit a story and what kinds of stories he like to inhabit.

ZYZZYVA: You have a penchant for stories about people telling stories, like Juan Rulfo’s “Luvina,” which you write about in “On the Beauty of Not Writing, or, An Unnecessary Homage to Juan Rulfo,” and Álvaro Mutis’ “The Tramp Steamer’s Last Port of Call,” which you write about in “Since the Beginning of Time.” In the former, you write that you return “again and again to Rulfo’s first book [The Plain in Flames] to re-experience something… fundamental: how to inhabit a story simply by listening.” You like these kinds of stories because they put this inhabitance on display. Of course, this is what you do in these essays. For you, is there much of a difference between performing listening in fiction and in nonfiction?

Peter Orner: Thanks for the question, which kind of lays out it better than I ever could. You inhabit a story by becoming an active listener, especially in stories like the incomparable Juan Rulfo’s, where it often feels like the speaker is talking directly into your—and only your—ear. As for listening in non-fiction versus listening in fiction, I’m not sure I’d say there is a difference. I think it’s all about concentration, whatever form of work you’re reading. And I find that I don’t do nearly enough of it, listening to the page, slowly, as I read. Reading online is making me read faster, which is the deadliest thing, I think. I’m not anti-technology or anything, but I think that increasing the speed by which we read is crappy for literature. I notice this with myself. When I read on-line, my eyes move a hell of a lot faster. My eyes aren’t taking it in as they would on a page, I’m skimming down the screen, I’m looking for something else to click—and so when I say we got to listen to the page, I mean we got to read with all our senses. Somehow this answer became a screed, but my point is I read to slow down, and that’s what I mean by inhabiting a story.

Z: In “Sisters and Brothers,” you write that your “preferred species of story [is] a kitchen table story, where a single motionless narrator looks out a kitchen and ponders.” If you could “get away with it” you’d write such stories for the rest of your life because you believe in “kitchen-table silence.” Does nonfiction allow you any more leeway here? Can you “get away” with this kind of narration more in nonfiction? It seems a lot of these essays are born of kitchen-table silence.

PO: You’re on to me. Yes, I want to live in kitchen-table silence in fiction and in non-fiction. I say enough of action, enough of things happening. God knows we got enough happening. Give me a story about a person thinking and I’ll fall in love. Enough of plot for plot’s sake. Plot is what goes on in my head when I can’t stop remembering. For me, that’s plot, for me, that’s kitchen-table silence.

PO: Again, I’m gratified to have such a careful, thoughtful reader. A question for you, Will, who I only know from the ether—but permit me a question—you seem like a slow reader, a rare slow reader, am I right? You’re a reader who takes his time?

I recently read a book by a musician who was tired of making music. So he tried recording every day sounds and using them to make another kind of music. Then he got tired of this, and decided that what he really wanted to do was sit and listen and not record anything, just take in the everyday sounds. So he’d sit in a subway station for hours and just listen and listen and listen. So yeah, a chain saw in the distance, the buzzing florescence of a taquería, those sounds, they make me happy. So do the squeaky brakes of my car. Public toilets flushing. The horn that blows in San Francisco every Tuesday at noon.

Z: In the last quarter of the book there’s an obituary for your father, which originally appeared in The Highland Park News. It’s a plainer kind of memorial than “All Father’s Are Fictional.” Could you explain why you included the obituary?

PO: Good question. I think I liked the juxtaposition (dumb pretentious word, but there you have it) of having my attempts to memorialize my father in a personal way alongside the traditional obituary that appears in the newspaper. Broke my heart to see my father’s whole life reduced to a few lines.

Z: Do you have a favorite piece in Am I Alone Here?

PO: The piece on Kafka, it was the toughest to write because it was personal. I had to re-write it about thirty or forty times, to get right.

Z: This is your only book of essays. Can you see writing another?

PO: Let’s say it might be a little while before I go back to writing about myself in such a direct way.

Z: You said in an interview with Tin House that reading is “like writing without the pain and loneliness.” After writing a book about reading, do you stand by this?

PO: Funny, I don’t remember saying that. The dopey things writers say in interviews. I’d like to retract it and say that reading and writing are all about pain and loneliness in equal measure, and I’m thankful for both.