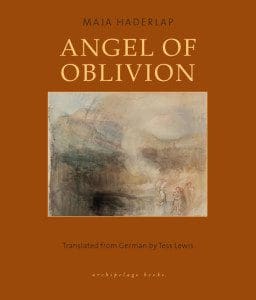 In her novel Angel of Oblivion (289 page; Archipelago Books), Maja Haderlap depicts a dilapidated, Slovenian-speaking valley in Austria following World War II. During the war, the Nazis identified this area in the south of the country as one riddled with partisans. Many were hunted down and killed, while others were taken away to the camps. (Among the survivors, it is debatable which fate was worse.) Now it’s the 1960s, and fragmented families people the valley, farmers who repeat the stories of their neighbors’ and kins’ annihilations like chants. Haderlap’s story focuses on one particular group of survivors, the Zdravkos, a family preoccupied by food and death, just like everybody else in the valley.

Pulling from her own family history, and narrating the story through the Zdravkos’ daughter, Haderlap introduces each member of the clan through his or her relation to food. When we meet Father, he is working with the cattle. “You can read Father’s moods from the cowpat’s flight. If he tosses the manure in a high arc to the back of the heap, he’s feeling confident. If he flings the cowpats hard against the front of the manure pile, he’s irate.” Father’s past colors the entire novel, never allowing us to forget his nightmare of hiding from the Nazis, alone in the mountains as a boy of 12. Thus his irate moods can burn toward the suicidal. One of the novel’s most striking scenes happens early on when Father locks himself in the apiary with his gun. We sympathize with his pain, and continue to do so afterward, even as he later threatens the rest of the family with the same gun.


Mother is first mentioned in relation to her absence from the kitchen. “Grandmother says my mother doesn’t know enough to work in the kitchen. She has no idea how to cook and whatever those nuns taught her in school has no place in our house.” The entire household seems to hate Mother because she was spared the violence of war. She doesn’t know what it was like to run from the Nazis or know the trauma of their camps. This bitterness is somehow passed on to the reader, though one can’t be sure if this aversion to Mother is deserved or merely a consequence of adopting the criticism of characters we find dear.

And there’s Grandmother, who was a cook at Ravensbrück concentration camp where she survived off of potato peels while imprisoned. But “whether or not she’s glad she’s alive, that she can’t say.” She feels she belongs underground next to Grandfather’s bones, and sobs in protest as Mother and Father begin to tear down the old farm house in order to build a new one. Her life such as it is revolves around cooking and baking, especially baking bread. She believes bread that is blessed can kill or save a person, and even hinges her own existence on such a conviction. “Grandmother had a special loaf of bread made that she keeps in her wardrobe. When it starts to get moldy, she will die.”.

Perhaps the most readily relatable Zdravko in Angel of Oblivion is its narrator. We follow her life from that of a young girl and into early adulthood, though the story focuses mostly on her childhood. In the first half of the novel, her age is rarely made clear, possibly to emphasize the idea of youth being as opaque as the valley itself. “I was planted in my childhood like a wooden stake in a yard that is shaken everyday to see if it can withstand the shaking.” Kids are so overlooked in this story, in fact, that it’s easy to forget that the narrator has younger siblings. She barely mentions them, though they are present through much of the “shaking” she endures. Growing up in a community stained by horror takes its toll on her. She is given such chores as collecting her drunk and unruly Father from the bar. The alcohol loosens dark memories from Father’s lips, and the narrator meditates on these memories, along with Grandmother’s, until she, too, becomes possessed by them. “I’m afraid that death has taken root inside me, like a small black button, like a lattice-work of dark moss creeping invisibly over my skin.” But between the darkness, there are flashing moments of light in this girl’s life, such as in the beautiful and simple scene where she and Father search for the queen in a honeycomb.

Angel of Oblivion was originally written in German (translated here by Tess Lewis), and this knowledge renders poignant one of the novel’s conflicts: Slovenian speakers having to use German. As the narrator says of Grandmother, “how hesitantly the German language crosses her lips because it’s more or less just the language of the camps.” Haderlap’s novel brings to mind the work of artist Anselm Kiefer (whose work can be seen at the SFMOMA’s “German Art After 1960” exhibition). His paintings evoke the same desolate feeling of a landscape, natural and mental, poisoned by the Holocaust. Though Kiefer’s art is influenced by foreign myths and symbols, there is that same idea that Maja Haderlap confronts in Angel of Oblivion: that even the generation born after the fall of the Third Reich is affected by its legacy.