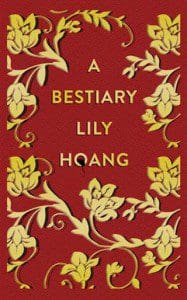 Lily Hoang’s new book, A Bestiary (156 pages; Cleveland State University Poetry Center), proves why a healthy amount of skepticism—at times bordering on distaste—for the self is an undervalued trait in literature. Throughout her collection, Hoang blurs the line between personal essay and prose poetry as she takes stock of her life and often comes to some unflattering conclusions. Reflecting on an unsatisfying, on-and-off-again relationship with her lover, she writes, “I feel like a feminist poser, talking a big game about empowerment but living a reality of passivity and self-contempt.”

A Bestiary offers a snapshot of a turbulent time in Hoang’s life, one in which she’s still grieving her sister’s unexpected death from a brain aneurysm while trying to provide a home for her nephew, a recovering drug addict. Her aging parents also offer a point of concern, with her mother using iPad games to escape from reality and her father needling her about her weight. As a writer, Hoang is refreshingly comfortable with balancing contradictions—the self, after all, contains multitudes. This is why she can remark on Page 107, “I want my sadness to be legitimized,” when earlier in the text she came to the conclusion, “Real sadness does not need a performance.”


Woven through the painful confessions are several knockout passages of dazzling poetic imagery. Consider this tender section regarding Hoang’s nephew: “There was a time, before, when the pupils of his eyes were floodlit with evil. Heroin eyes. They were shiny and vast, oceanic, sublime. And now those same eyes are gentle and caring. He cries from those eyes when his family is cruel to him. He calls me and is no longer ashamed to weep.” Elsewhere, she details the calm amid the storm of her troubled relationship with would-be boyfriend Harold, in a section that should feel painfully familiar to anyone who has had to search hard for solace with a partner: “Those nights we watched television, and together, we hid from the monster our relationship had become. Our sticky fingers would interlace and all of our turbulence and turmoil would calm into tender sleep.”

Hoang’s sentences gleam and draw blood like barbwire. The pages are sparse and awash with white space, meaning a reader can finish the book in one rapturous sitting but will be rewarded by multiple readings. The manuscript was selected as the winner of the Cleveland State University Poetry Center’s 2015 Essay Collection competition, which speaks to the project’s confluence of genres. In post-modern fashion, Hoang references throughout previous drafts and revisions of A Bestiary, earlier renditions the reader will likely never have access to.

A Bestiary makes frequent allusions to Greek mythology, Chinese folklore, and other fables. (“I have tangled the fairy tales I write with my life,” Hoang states, which could be the book’s thesis statement.) Hoang utilizes these timeless tales to illustrate the eternal wanting—“the disgust of desire”—at the heart of contemporary life. We are all Sisyphus pushing that boulder up the hill, “…filled with the hope that perhaps today will be the day he defies the gods again.”

Hoang also traces her experiences growing up as a second-generation American, the child of Vietnamese immigrants, at a time in the Nineties when celebrities such as Margaret Cho and Lucy Liu were making inroads for Asian American women in the media. In touching on the importance of friendships, her sometimes trying relationship with her aging parents, and the brutal realities of the job market for would-be writing instructors, she is constantly interrogating her identity: after an uncomfortable exchange at a coffee shop in which an older white man praises “Oriental women,” she remarks, “I use words like ‘problematic’ because I am an academic and this is how we speak: buzz words and hip plastic glasses.”

Lily Hoang’s insomnia-fueled ruminations may not prove uplifting, exactly, but they do hold great power. She writes, “You want language to swarm and eat this carcass you have become until there is only the glint of bone against sunlight,” which is precisely what A Bestiary accomplishes. It strips away artifice and the ostensible distance between author and reader to deliver a book that, whether entirely autobiographical or not, rings undoubtedly true. A Bestiary is proof that sometimes the only comforting thought we can offer ourselves is “I am probably less damaged than I feel right now”—and a reminder that, sometimes, that’s enough.