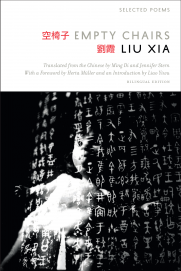 Loneliness is palpable among the stark emotions of Beijing artist and poet Liu Xia’s Empty Chairs: Selected Poems (Graywolf Press, 118 pages), The collection, translated from the Chinese by Ming Di and Jennifer Stern, spans from 1983 to 2013, and shudders under the weight of political and psychological violence: the 1989 Tiananmen massacre; the multiple (and current) imprisonments of Liu Xia’s husband, poet and activist Liu Xiaobo; the eleven-year sentence of her younger brother, Liu Hui. At the center of these circumstances sits Liu Xia, who has been living under strict house arrest since her husband received the 2010 Nobel Peace Prize. Despite the state’s vast stronghold over the lives depicted in her poems, Liu Xia’s writing occupies a uniquely bitter, interior space—an investigation into madness and its characters rather than into political players. Empty Chairs is a book about the objects that remain when companionship is stripped away, about the fight to keep a body relevant when faced with “無”—without; lack.

Empty Chairs moves through three decades of poetry chronologically, with the month and year noted after each last stanza. The chronology allows us to experience Liu Xia’s obsessions in an ever-present past. In “Poison” she writes, “Van Gogh’s ear sends me an urgent message / that the earth is about to collapse…the weather forecast on TV / and Kafka’s crazy eyes.” We follow her repeated yearnings for “the bird” that always escapes her; there are skeletons, the dead eyes of children, and anthropomorphic dolls. These allusions and images confuse our sense of the real as we watch them focus into almost tangible characters within the walls of Liu Xia’s home. They become her company, offering her quietude in their humor, crudeness, and believability. “You have a strange pet,” she writes in “Transformed Creature,” “…When you’re alone, / it will lie in your lap, / preoccupied.” But the images often become nauseating in their darkness when we realize the picture of madness the objects describe.

A doll turns her back to me
to stare out the window for a while.
The dazzling white of the snow
stings her eyes,
but she refuses to close them.
Love is so simple yet so difficult.

…I must guard these
small fragile things
as if guarding our life.

In the above poem, “Silent Strength,” we can somehow understand the doll as living—separate from Liu Xia, from us—until the last line, when we are reminded that the doll is a projection of Liu Xia and therefore a ghostly part of her. “As if guarding our life,” she writes. It is haunting—the loneliness, the fragmentation of her self into the surrounding objects—but most of all, living with these illusions reads as utterly exhausting. Liu Xia seems so tired, so gaunt in her poems. In “Chaos” she writes, “I’m surrounded by unreal images…I’m no longer the owner of this room. / I’ve been looted.”


The breakdown of the self is prominent throughout Empty Chairs. Liu Xia writes her poems in a fiercely introspective first person that, in its all-consuming obsessive mode, causes the narrative voice to divide and disassociate. The second-person address is most often directed to her husband, but sometimes Liu Xia slips into conversations with refracted versions of herself. In “Game” she writes, “I see another me playing a dangerous / game in the human world.” She imagines herself “acting whimsical,” unburdened from concern and self-absorption. But the dual images fuse into one, the psychological making way for the reality of the body—singular and solitary:

Let me play the game with you
regardless of ending with a full house applauding
or one person alone crying
to the night.

Liu Xia takes this argument between inner and outer pain—the envy one has for the freed second self, the lonely realization of a singular form—even further as the splitting of the psyche transforms into physical destruction. In “A Grapefruit,” Liu Xia writes, “I want to be a grapefruit / cut by a knife or bitten apart.” Here, pain is preferable to “watch[ing] my body rot / with maggots squirming inside”—it is better to puncture the skin, to understand it as tangible and whole, than to be consumed by a decaying mind. Perhaps the fear of the internal (obsession, the possibility of madness) moves one toward active self-destruction, or perhaps the act of destruction is in fact motivated by the internal hand. The line between internal and external blurs, and the last stanza makes a turn to morbidity. “I’ve been doing one thing repeatedly— / peeling grapefruits one after another / absorbing the nutrients of my own death.” Here, Liu Xia has been turned inside out, the internal body evoked in the flesh of the grapefruit, to be consumed back through the mouth. Death might be read as productive—as providing something essential—and maybe even as victorious over psychological pain. But in the context of Empty Chairs, Liu Xia seems to suggest there is no alternative to a consumed, rotted death. “I am the poison of this world…” she writes in “Poison,” “I can see wriggling maggots…Do not hide death. / Do not build an artificial paradise.”

How do we place the body of Liu Xia then, fragmented in her poetry, and unreachable beyond her manuscripts? How do we associate her if she is disassociated? In their afterword, Ming Di and Jennifer Stern suggest that it is in their process of translation that a kind of lifelike energy is built. Because they were unable to communicate with Liu Xia, translating her poems mirrored the process of working with the manuscripts of a poet who is no longer living, of sitting next to her empty chair. But, they write, “[i]n the case of Liu Xia, the empty chair feels different… We are fueled by Liu Xia’s absence to make her work as alive and potent as it is in the original Chinese so that her absence becomes a presence.” We sense her in the Chinese text that lies adjacent to the English translation—the monolingual reader can follow line breaks and stanza length and engage in the visual form of each poem. And Liu Xia suggests that she, too, sees herself as embodied in her writing. “I’m a philosopher who thinks / with my body…,” she writes in “Rant,” “the body / of spirit whose language is / poetry. I am prosody.” The work of translation becomes the task of bringing Liu Xia into a world where existing is to live and to be heard, where “her silence is something we no longer need to abide.”

But in Liu Xia’s interior world, she is not allowed this liberation. Leaving the courthouse of her brother’s trial, she famously said, “If they tell you I’m free, tell them I’m not free.” Liu Xia is a woman whose life is inextricable from the state, from her emotions, and most notably, from her husband’s history. Since their meeting in the 1980s, Liu Xia’s life has been defined by her marriage, her actions read in reference to Liu Xiaobo’s. Di and Stern write, “Liu Xia’s love for a human rights activist was her political crime, and so for her there can be no love poem that is not a political poem…Home also means prison.” Even her tender recollections of Liu Xiaobo are colored with the uncanny. In “June 2nd, 1989” (named for Tiananmen Square), she writes, “I patted your head / and your hair pricked my palm / making it strange to me”; in “Days,” “Cigarette ashes and beautiful fish bones / are jammed down our throats. / Without looking at each other / we climb into bed.” And while the title poem of the collection was written in 1998, years before Liu Xiaobo became internationally known, his presence echoes within it. During the 2010 Nobel Peace Prize ceremony, Liu Xiaobo’s prize was famously awarded to an “empty chair.”

“There are things / I can’t escape…” Liu Xia writes to her husband in “Entrapped,” “Every night I needed / to hear your voice…I chewed and swallowed every word you uttered.” Like her other self, Liu Xiaobo’s voice lives tangibly in her house—despite and because of her love for him, he is the loneliness that silences her, the maddening body living within her. And then the last line:

This is a disease.

One hopes Liu Xia will move toward resolution or some kind of peace in the course of Empty Chairs. But where there is hope at the beginning of the book—where Liu Xia lights a red lamp “so its light would tell our bird / we were waiting”—the second half is a disappearing act, eager for an endpoint. “I’m exhausted and want / to stop,” she writes in “Rant,” “but this spirit in me won’t permit it.” In the end even death will not free her from her prison, and so her body slows to a terrifying stillness, hardening into the emptiness surrounding it. “She is no longer the bird she once was…” writes Liao Yiwu in her introduction, “instead she became a tree. She can’t move her own nest—Liu Xiaobo can’t move, so she can’t either.”

Is there anyone to keep you company?
There are birds.
I don’t see any.
Listen to the sound of fluttering wings.
Wouldn’t it look nice to draw birds in the tree?
I’m so old and blind I wouldn’t see them.
You don’t know how to draw a bird, do you?
You’re right, I don’t know how.
You’re an old foolish tree.
I am.

Imprisonment turns to immobility—a petrification of the mind and body. We can only hope to revivify her by hearing her voice.