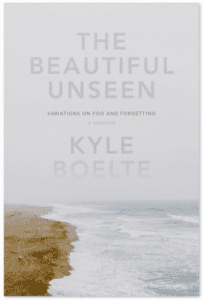 Kyle Boelte’s memoir, The Beautiful Unseen: Variations on Fog and Forgetting (Counterpoint; 176 pages), weaves together the author’s investigations into the mysterious San Francisco fog with an exploration of his memories of the life and suicide of his brother, Kris. On one side of this dual narrative, Boelte researches the fog from the standpoint of San Francisco history and the science behind the Bay Area’s climate. On the other, he remembers his life before and after his brother’s death. Juxtaposing these two themes, memory becomes reminiscent of the fog and vice versa.

With remembering comes forgetting, and memories can cloud over time. Boelte’s memories of his brother, whose death occurred when the author was 13, become vague and even seemingly warped as he gets older. There’s an instance in the book where Boelte realizes he and a friend remember the same situation differently: one remembers Kris being there and the other doesn’t. Via email, we asked Kyle Boelte (who has an essay in ZYZZYVA Issue No. 103, out in April) about how he approached writing on such a personal subject.

ZYZZYVA: Writing a memoir about your brother’s suicide is a personal and difficult topic. Why choose to write about it? And was there any point in which you had to force a separation between yourself—the writer—and you the sibling?

Kyle Boelte: I never intended to write a memoir. I had written about my brother Kris several times in my life, as early as high school. Short stuff. These little attempts. But as a writer, memoir wasn’t something I was all that interested in. I’m a private person, at least by today’s standards. I don’t share a lot about myself on Facebook and Twitter. I don’t relate to the current obsession with the selfie. The idea of sharing all my secrets with the world has never been appealing. And as much as I admire a good literary memoir, where the past becomes this lush, vivid, living world, those kinds of books never felt like my experience of memory. My memory is fragmented; it’s incomplete. Memories are constantly appearing and disappearing and mixing with the present.

It wasn’t until I stared writing about San Francisco’s fog that I realized I wanted to write this book. That there was another way. Some might call the book an “anti-memoir,” as it’s as much about forgetting—and being present in the world—as it is about memories.


I cannot separate myself from my brother’s story. There is no objective stance. But I have tried to write the story from several different perspectives. There are many in the book—an AP article, my parents’ voice, my own voice—and I hope these collected voices provide the reader with a more complete sense of my brother’s story than any one of them could provide on its own.

Z: The writing in The Beautiful Unseen is similar to the movement of fog. Like the story of the SS City of Rio de Janeiro in Chapter Two, where the fog continuously lifted and then settled around the ship in the Bay, the prose and structure of your memoir lifts us into the past and then settles us again in present, where memories are less clear. Why did you choose to structure the book in this way?

KB: It was the only way I could write the book and feel like I was capturing my experience. Memory is always accessed in the present. I might be able to experience the past in some way, but I am doing it now, in this place, at this time. The past and present are always mixing. The present is made up of the past, and memory is alive only in the present.

I think there is a lot of pleasure to be found in linear narratives, and I enjoy reading them. But for this book, this subject, I wanted to be able to allow for loose ends, for unknowns, and for nonlinearity.

Z: Real documents and letters (emails, death certificates, school essays, etc.) are used heavily throughout the memoir. Was this a way to try to decipher what was real and what was left or forgotten in memory?

KB: The collage element developed organically as I wrote the book. Early on, I came across the AP article [on my brother’s death]. I was stunned by its simplicity. My brother’s life had been reduced to a few sentences. In some ways, I think I wrote the book to correct that article. I didn’t want the AP article to be the only perspective of my brother that the world had access to.

Later on, my parents showed me the box with all the documents relating to Kris. I couldn’t have planned including those artifacts in the book when I started, because I didn’t know they existed. But once I had them, I wanted the reader to be able to experience them as I had. Just as I wanted the reader to experience both the chapter “A Field Guide to San Francisco’s Fog” and the fog itself; Kris’s artifacts, and the memories themselves.

Z: Could you talk about Chapter 42?

KB: A few days after I sent my parents a final copy of the book, my mom sent me a text message.

Mom: Chapter 42 of your book is two blank pages?
Me: Five blank pages, actually.
Mom: Someday, I’d like to know what those pages say.

I had to explain that those pages hadn’t been redacted. It’s not like I found an answer and then didn’t share it with the reader. Our desire for answers is incredibly strong, especially when it comes to suicide. Even for my mom, who has known about the unknown for twenty years, “the presence of the unseen appalls.”

Z: In this study of memory, there is an emphasis on the forgotten. Why do you think it’s important that one can’t be discussed without the other?

KB: Because it’s true to life, I think.

There’s this moment in Chapter 23, where I’m hanging out with my friend Shane on Tank Hill, in San Francisco, and we’re discussing forgetting. We’re talking about how funny Kris was, but I cannot remember any of his jokes. It’s pretty painful, to not be able to remember one of the very things that makes a person who they are. That chapter ends with a few lines that would never work in a novel. I ask this question: “We were good friends, right, Kris and me?”

If I were writing a novel, my editor would have deleted that line immediately as unrealistic. How could I not have known the answer to that question? But the truth is, I didn’t.

Sometimes nonfiction works because you can tell the truth, without being limited by what is realistic. Life, so often, is not realistic. It’s just real.