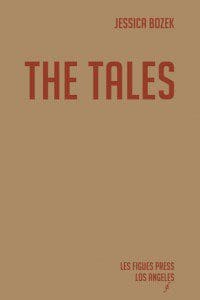 The Tales by Jessica Bozek (Les Figues Press, 78 pages) consists mostly of prose poems from a variety of first-person narrators, all on the subject of a fictional genocide known as “Operation Sleep.” Inspired largely by the literature of witness, on which she based a seminar at Boston University called Reading Disaster, Bozek tells the grim story of a land whose citizens die en masse upon a visitation from a soldier who hails from a powerful nation and is fluent in the local tongue. When the soldier speaks, the people of the land sink into the earth—except one, known as the Lone Survivor, who alone remains to tell the tale. Poly-vocal and formally hybrid, The Tales combines the language of contemporary politics with that of age-old myths, post-colonial thought, and heartbreaking testimony, to construct a parallel world that is at once strange and strikingly familiar.

The many soliloquists include birds, dogs, a pulmonologist, a diagnostician, an architect, and a linguist. The book opens from the perspective of “The Revisionist Historian,” whose account of the carnage is appropriately—infuriatingly—euphemistic. Most narrators are only introduced by their professional title, giving the impression of assorted ethnographic scholars from outside the affected community. These more analytic reports are interrupted occasionally by a section entitled “The Saving: A Fairy Story,” in which an unidentified narrator recounts an alternative version of Operation Sleep in which the victims escape. These “Fairy Stories” contain some of the book’s most miraculous imagery: a loon teaches the citizens how to live underwater; puffy coats buoy their wearers up out of the earth; people make their bodies spark and flame with rage. One such section reads:

After archaeologists laid out the complete skeletons,
we read the stories of the victims’ lives in their bones.


Those who had been spiteful in their time lacked
cartilage and connective tissue. Their bones could not
be put back together.

But we stroked the clavicles of those who had been
mindful and mindfully ambivalent, and they came to
life once more. We gave each a pair of shoes so that the
wearer might cross a mile of ground with every stride
and never again be caught.

Despite their implausibility, these sections strike me as some of the truest; they reflect our deep, irrational belief that we can rewrite our pasts, will away our traumas by dreaming up deus ex machinas and might-have-beens. Bozek’s mythological sensibility and incorporation of elements from American Indian folktales lends these sections an air of timelessness and transcultural relevance.

The Lone Survivor’s testimonies make up the rest of the book. We follow him as he emerges from the ground to find himself alone. As he reckons with his solitude, I am struck by the specificity of his grief: he misses his lover’s hands, his freckles, the bird-themed exam rooms where he worked as a pediatrician. The ordinariness of these images, rendered in Bozek’s crystalline prose, makes them all the more resonant. For Bozek, the primary unit of meaning is the sentence: stark, declarative, figural but rarely figurative. Some sections contain just one sentence—“In pet years, even the young ones lived until middle age;” “They didn’t know they were drowning;” “Now who can I heal?”—and one of the Lone Survivor’s tales comprises a single word: “Fuckers.”

In Part III, the focus shifts from the details of the event to those of its aftermath. We learn that the government that exterminated the Lone Survivor’s community has offered to pay him “reparations” and help reconstruct his former life. (“I have so many problems with their language,” he writes.) By surviving the genocide, he has established himself as a valuable anthropological specimen, the last living member of an extinct culture, and the only witness to the atrocity. In addition to rebuilding his home—complete with a closet of his lover’s re-created clothing—the government asks the Lone Survivor to devise a memorial for the dead. He conceives the following:

… a constellation of small clothes, each with the name
of one dead inscribed on a pocket or along a hem. These clothes I
would string through a woodland and arrange by meaningful
adjacency. A woman’s name might flutter near her partner’s, their
children’s, her co-workers’.

I need a memorial that will disintegrate over time, grey and fray as
most of the dead did not have a chance to.

Bozek’s notes on this section describe Michael Arad’s 9/11 Memorial, in which the names of the dead are arranged according to “meaningful adjacencies,” and Jochen Gerz and Esther Shalev-Gerz’s Monument against Fascism, in which an obelisk is lowered into the ground as visitors add their signatures to it. The crux of The Tales lies in this poethical concept of memorialization—in the question of how to construct an elegy that is somber without being static, referential of the dead without becoming, in Susan Sontag’s words, an “institution-cum-emporium” that traffics in “the marketing of experiences, tastes, and simulacra.” To paraphrase Joan Retallack, an elegy (or monument) becomes the nominal stand-in for the deceased—a signifier that appears only when the names of the dead cease to be predicated by verbs of being. By extension, the truest elegy—the most representative testament to a truncated life—is one that is perishable, that will “grey and fray as most of the dead did not have a chance to.”

While the book alludes to a number of historical atrocities, the most available cultural analog of Operation Sleep is, for me, the extermination of American Indians by European settlers, with the Lone Survivor’s reconstructed homestead resembling the modern reservation. Yet, as Carolyn Forché writes in her Introduction to Against Forgetting: Twentieth Century Poetry of Witness, “A poem that calls on us from the other side of a situation of extremity cannot be judged by simplistic notions of ‘accuracy’ or ‘truth to life.’” Likewise, a reader of The Tales should not expect to construct a reliable or altogether familiar narrative from the disparate moments recounted by its narrators. She should not assume that the book’s diversity of perspectives might manifest anything like an emergent god’s-eye-view. Rather, the book’s central project seems to be the broad interrogation of our culture’s imperialistic past and present, and its inability to make sufficient space and opportunity for voices of alterity. (“Only you can fix your life,” the Lone Survivor’s therapist tells him.) By defamiliarizing the place we live, The Tales makes us aware just how dystopian it really is. Like the soldier whose stories change the course of civilization, Jessica Bozek is that rare communicator with the power to make us see the world a little differently.