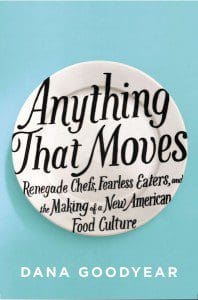 If you’re finding yourself bored with the same old menu choices, which always hover near the top of the food chain, but you can’t imagine consuming large sarcophagid maggots, scorpion, spleen, lungs, lips, or even a bite of an endangered species for dinner, let Dana Goodyear navigate for you the outer limits of this emerging American food scene.

In her new culinary narrative, Anything that Moves: Renegade Chefs, Fearless Eaters, and the Making of a New American Food Culture (272 pages; Riverhead Books), New Yorker contributor Goodyear explores the outer shoals of foodie culture with narrative skill and aplomb. More than just a recitation of bizarre foods preferences, Goodyear, who teaches at the University of Southern California, underscores her research into this gastronomic underground by providing the historical background, philosophical tenants, and legal framework that created America’s culinary landscape—a place, she claims, undergoing rapid change due in part to social media.

Whether in Montana munching mealworms fried in butter, musing on the important role of storytelling and salesmanship in the gourmet industry, or hanging in Venice with adherents of Rawsome, “an expensive, all-cash, members-only specialty store devoted to radically unprocessed food,” Goodyear’s insights and reporting rattle preconceived ideas about what we should or shouldn’t eat.

Some of the most compelling ideas in Anything That Moves spring from the connections among food security, energy consumption, costs to the environment, and the language surrounding food. As Goodyear writes about the “collection of go-betweens, chefs, and adventurous eaters-scofflaws, innovators, and crusaders-who are breaking with convention to reshape the American palate,”  the reader is introduced to a subculture that (if it doesn’t repulse) may jolt the curious into their own tasty experimentation.


We spoke to Dana Goodyear over email about her new book and some of the ideas she addresses in it.

ZYZZYVA: How would you describe your relationship with food?

Dana Goodyear: I am a curious eater, and fairly open, but sometimes I stand on the end of the diving board, trembling.

Z: How would you say a foodie defines quality?

DG: Foodies tend to be interested in the unofficial and hard to come by. For them, the most coveted ingredients are pure, unprocessed, and smuggled into the country in someone’s hand luggage.

Z: You write, “The deeper into the foodie world I ate, the more aware I became of its reactionary tilt.” How so?

DG: What unites everyone I write about in Anything That Moves is a distinct and fierce sense that they should be able to access a greater number of foods than our regulations currently allow.

There is a great willingness among committed eaters to ignore or resist government. This stems from a deep irony: that the laws put in place a century ago (based on the revelations of The Jungle), which were intended to restore consumer confidence and introduce transparency to a newly industrialized food system, have in fact divorced people further from the sources of their nutrition.

Z: Would you talk a bit about marine ecologist Daniel Pauly’s belief that we are not so much changing our food preferences as reacting to forces we choose to deny? You quote him as saying, “This idea of  ‘liking things’ is actually a reflection of the pressure on the environment. You like what you can get.”

DG: Think of calamari: fifty years ago, it was bait; now it is mainstream bar food. To a large extent, our tastes are shaped by what is available.

Z: What about the idea that behind the hedonism of our cuisine there’s anxiety and “resourcefulness tricked out as decadence”?

DG: The foods of poverty are being recast as elite and presented in very rarified contexts. This reflects an anxiety running through American culture about our place in the world, and a sense that the 20th century Western way of eating won’t sustain.

DG: The notion of the restaurant as a place with four walls and a business license is under siege. There are temporary restaurants, unofficial restaurants, food trucks. The new structures of dining allow for greater experimentation on the part of the chefs, and demand more of diners.

Z: Is there anything you think readers should know about your book that I have not asked?

DG: Our ideas of what it is outlandish or “un-American” to eat shift all the time. In the 1940s, Hawaiian Punch was a specialty food. Sushi was considered threateningly exotic until the rise of the Japanese car opened people’s minds to Japanese culture.