Readers were introduced to Amy Stewart in 2004 upon the publication of her book The Earth Moved: On the Remarkable Achievements of Earthworms. Using her small backyard in Santa Cruz as a starting point, Stewart took the reader on a delightful tour through the unexpectedly fascinating world of earthworms. “Ten tons of garbage. It is staggering to think of the amount of waste that people produce. Californians dispose of about thirty-eight million tons of waste per year. I did the math; it works out to seventy-two tons per minute.” Then Stewart relates how earthworms provide a remedy to the trash problem. Throughout this chronicle, Stewart artfully makes connections between various disciplines including botany, organic gardening, biology, geology, taxonomy and Charles Darwin, for exploring earthworms.

Since writing The Earth Moved Stewart has delved into the worlds of wicked bugs, wicked plants and the flower industry. In her latest book, The Drunken Botanist: The Plants that Create the World’s Greatest Drinks (381 pages; Algonquin Books of Chapel Hill), Stewart again makes illuminating connections when none at first are readily apparent.

In the author’s description of the Angostura tree, Stewart explores the connection between the German explorer and botanist Alexander von Humboldt and a late 19th and early 20th century legal battle over trademark law, which set legal precedents around the world. She includes a recipe for the Champagne cocktail, which Stewart notes, is “an excellent way to appreciate the flavor of the angostura tree.” 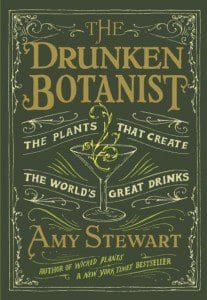 Stewart divides The Drunken Botanist into three sections and limits her discussion to 160 plants. “It would be impossible,” she writes, “to describe every plant that has ever flavored an alcoholic beverage. I am certain that at this very moment, a craft distiller in Brooklyn is plucking a weed from a crack in the sidewalk and wondering if it would make a good flavoring for a new line of bitters.”


Stewart begins with an alphabetical exploration of the plants, from agave to wheat, which humans enlist in the making of alcohol and “the twin alchemical processes of fermentation and distillation from which wine, beer and spirits issue forth.” Next, she proceeds through a lively discussion of the numerous herbs and spices, flowers trees, fruits, nuts and seeds with which we infuse our drinks. “Some distillers claim to use over a hundred different botanicals in their secret recipes,” Stewart explains. She concludes with a ramble into the home garden where “we encounter a seasonal array of botanical mixers and garnishes to be introduced to the cocktail in its final stage of preparation.”

Larded through the beautifully designed book are delightful informative charts, including ones on common gin ingredients, hop varieties, Artemisia species used in liqueurs, growing notes for berries and wine, sake nomenclature and a chart for Garden Cocktails: A Template for Experimentation. And the book itself is beautifully designed,

Tucked within the narrative are short asides titled “Bugs in Booze,” where Stewart discusses such topics as worms in mescal, honeybees and their role in intoxication, and the scale, a minute insect responsible for a red pigment used in liqueurs.

With more than 50 cocktail recipes, as well as instructions for syrups, infusions and garnishes, there is enough variety that even the most knowledgeable cocktail connoisseur can expand their knowledge. We talked to Stewart, who also co-owns a bookstore in Eureka, further about her books.

ZYZZYVA: Let’s start with your first book, From the Ground Up. In there you chronicle the first garden you planted when you moved to Santa Cruz. What prompted you to plant that first garden?

Amy Stewart: Opportunity, really. It was the first time I had a little land, a little time, and a little money. Also, Santa Cruz is a place where you almost can’t help but garden. Just about anything grows there, and when you move into a neighborhood where everyone else is planting a garden, it’s hard not to join in.

Z: In From the Ground Up you wrote, “If I had it to do over again, I would have waited a little while before I planted my first garden. I would have watched the weather patterns, noticing which parts of the yard got hit hardest by rains and salty sea winds, and I would have made a sun map of the backyard to help me figure out what to plant where.” Were there other miscalculations you made with that first garden?

AS: To be honest, that first garden was planted in 1994, almost 20 years ago! It’s hard to think back and come up with another miscalculation other than the one I wrote about. It’s still a relevant lesson, though. When I moved to Eureka twelve years ago, I faced the same thing. The weather was different, the soil was different, and it took not just one year, but several years, to figure out what works there. I’m still figuring it out, really.

Z: How did the idea for The Drunken Botanist come about?

AS: Believe it or not, this book was born over drinks. I was sitting with my friend Scott Calhoun, a writer and agave expert from Tucson. Someone had given him a bottle of Aviation gin and he said, “Yeah, I’m not much of a gin drinker. I don’t know what to do with this.” Well, I knew what to do with it! I made him a variation on a gin and tonic that involves jalapenos, cilantro, and cucumber. As we drank, I kept talking about how anyone who is interested in plants should be excited about gin, because it has so many interesting plants in it. And really, that’s true of every bottle behind the bar. Tequila comes from agave, rum from sugarcane, bourbon from corn, and so on. At some point that night, I said, “Somebody should write a book about that!” So I did.

Z: Your books are such a pleasure for the eye and hand. The Drunken Botanist has a pleasing two-color vintage style. Can you talk a bit about the overall design, illustrations and the compact size of your books?

AS: Thank you! A lot of thought goes into the look of my books. Algonquin does small, beautifully designed books very well. In this case, we had a very talented designer, Tracy Sunrize Johnson, who had designed some other books I’d admired. We reached out to her and fortunately, she was available and really understood what we were trying to do. She took the idea and ran with it, and there was very little for us to do other than enthusiastically approve everything she did!

Z: Along with text, your books always include lots of additional information in the form of charts and illustrations. From the Ground Up includes directions for making a sun map. In Wicked Bugs: The Louse That Conquered Napoleon’s Army & Other Diabolical Insects (2011), you note the size, family, habitat and distribution of each insect you discuss, and in Flower Confidential: The Good, the Bad, and the Beautiful in the Business of Flowers (2007), you cite statistics on cut-flower consumption per capita worldwide. Why use this technique rather than incorporating the material directly into the text?

AS: I want my books to be a pleasure to read. I’m a writer first—if I wasn’t writing about nature and science, I’d be writing about something else. I’m in this to create good literature—to make art. And facts and figures don’t always read well. If I didn’t think I could make it lyrical and pleasurable to read, I pulled it out and put it in a box.